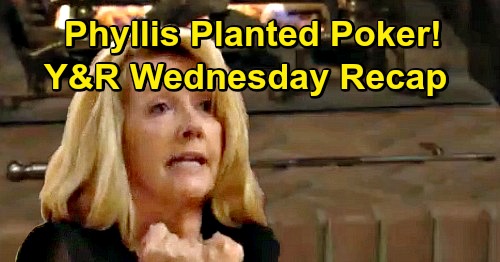 The Young and the Restless (Y&R) spoilers for Wednesday, January 23, tease that Mia Rosales (Noemi Gonzalez) will flirt with someone surprising. She’ll turn on the charm with Billy Abbott (Jason Thompson), who will gladly do the same. Of course, neither one of them will be serious – not right now anyway! Billy wants Victoria Newman (Amelia Heinle) and Mia’s all about those Rosales brothers.

Afterward, Mia will bump into Sharon Newman (Sharon Case). The Young and the Restless spoilers say Sharon will keep her head held high and promise to attend the vow renewal. She’ll try to hide the pain she’s feeling over all this. Meanwhile, Arturo Rosales (Jason Canela) will get a surprising request. He’ll be taken aback when Rey Rosales (Jordi Vilasuso) asks him to be his best man at the vow renewal.

Arturo will agree quickly and assure Rey that he deserves to be happy. Mia will pop up and contend that they both deserve it. Once they chat a bit, Y&R spoilers say Arturo will find out the source of this best man suggestion. He obviously won’t be pleased to know it came from Mia, but he’ll try to hide his displeasure from Rey the groom.

Next, Rey will catch up with Sharon and offer an apology. He’ll be sorry that Mia just dropped the vow renewal bomb like that. Sharon will insist that it’s all good. She won’t see any reason why she shouldn’t attend the ceremony and celebrate the blissful couple’s future.

Across town, Devon Hamilton (Bryton James) will get pushy again. He’ll keep pestering Ana Hamilton (Loren Lott) about the songwriter’s name, so she’ll finally claim it’s Rezzy. Later, Mia will try to butter Devon up so they can book the club for the vow renewal. Devon will resist at first, but Mia’s persistence will pay off. Devon will appreciate that she fights for what she wants like Hilary Hamilton (Mishael Morgan) used to do.

Other Young and the Restless spoilers say Devon will get the info he’s been waiting for. He’ll receive word that Ana’s name is on the legal document, so he’ll back her into a corner. Ana will finally confess that she indeed wrote Fenmore “Fen” Baldwin’s (Zach Tinker) new hit song.

At Crimson Lights, Arturo will spot Mia and rant about the vow renewal. He’ll feel like this is some kind of power play, but Mia will snap they should all just move on. At Victoria’s place, she’ll let Cane Ashby (Daniel Goddard) in and find out about Billy’s prison visit. She won’t think Billy made the right call, but she’ll concede that they were the true guilty parties.

Cane and Victoria will be on the same page about struggling right now. They’ll think they just found a bad coping strategy, so they’ll opt to keep their distance from now on. Before Cane heads out, Billy will appear. He’ll get into another heated argument with his rival, but Cane will ultimately take off.

That’ll leave Victoria and Billy to address their issues. She’ll think he was wrong to spill the kissing secret to Lily Ashby (Christel Khalil). Victoria still won’t like feeling like a rebound, but Billy will insist he loves only her. They’ll bicker until Billy wonders if Victoria is capable of loving anyone at all.

Over with Nick Newman (Joshua Morrow), he’ll continue contemplating who framed Victor Newman (Eric Braeden). During his discussion with Nikki Newman (Melody Thomas Scott), Nick will point out that it had to be someone close to the situation. He’ll consider who would’ve hated Victor enough to get the fireplace poker out of the lake.

The Young and the Restless spoilers say Nikki will have a lightbulb moment. She’ll realize Phyllis Summers (Gina Tognoni) never threw the murder weapon out at all! When confronted, Phyllis won’t deny it. She’ll defend her actions and suggest that she simply refused to go down for J.T. Hellstrom’s (Thad Luckinbill) murder. Phyllis wanted to keep the fireplace poker in case she needed to set up Victor.

Phyllis and Nikki won’t mention the rest of the evidence, so what’s the whole truth? Did Phyllis also set the stables fire? Did she plant the poker herself or did someone else have a hand in all this?

This Y&R mystery has many more twists in store! We’ll give you updates as other Y&R news comes in. Stay tuned to the CBS soap and don’t forget to check CDL often for the latest Young and the Restless spoilers, updates, and news.