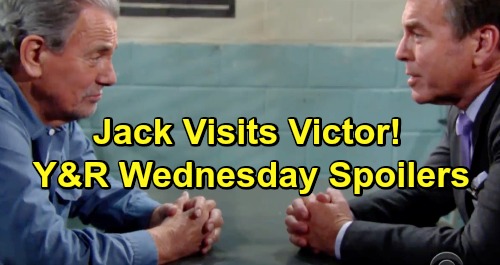 The Young and the Restless (Y&R) spoilers for Wednesday, January 9, tease that a familiar face will pop up on the CBS soap. Y&R fans haven’t seen much of Lily Ashby (Christel Khalil) lately, but she’ll be on screen again for some emotional scenes. Cane Ashby (Daniel Goddard) will receive an upsetting letter from his wife, so it looks like we’ll see a fake flashback of when she wrote Cane behind bars.

Cane will read Lily’s distressing words and feel completely helpless. However, he’ll also gain a better understanding of how Lily’s feeling and why she’s been pushing her family away.

Lily’s having a rough time in prison and it’s forced her to harden her heart a bit. If she stayed too attached to her husband and kids in Genoa City, it would only make life more difficult for her.

Lily can’t be with home with Cane, Charlie Ashby (Noah Alexander Gerry) and Mattie Ashby (Lexie Stevenson) right now, so she’s choosing to shut them out. She’s closing herself off and adapting her personality to be the person she needs to be in prison.

Life’s not easy in there, so Lily will assure Cane that she’s just doing what she has to do. It doesn’t mean she loves her family any less.

Nevertheless, The Young and the Restless spoilers say Cane will be devastated by Lily’s words. Once he sees just how hard things have become for her, it’ll only add to his guilt over that kiss with Victoria Newman (Amelia Heinle).

While Cane mulls over his remorse, Jack Abbott (Peter Bergman) will waltz in the police station and ask to speak with Victor Newman (Eric Braeden). He’ll have big plans for this visit.

Y&R viewers know Jack and Victor have a longstanding feud. Victor has gotten away with far too much over the years, so Jack will feel like karma finally came for him.

He’ll point out that whether Victor is guilt of J.T. Hellstrom’s (Thad Luckinbill) murder or not, he’s going down for it. Jack will thoroughly enjoy watching Victor suffer in this rotten situation. Of course, Victor will inevitably get off the hook sooner or later. It’s just a matter of when and how.