BY Heather Hughes on July 9, 2019 | Comments: one comment
Related : Soap Opera, Spoiler, Television, The Young and the Restless 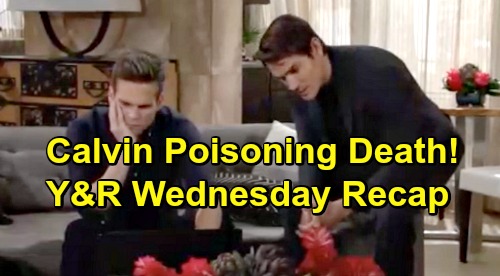 It won’t be long until Adam arrives and insists Connor is his son. He’ll be appalled by Chelsea taking Nick with her to see Connor, but Nick will pipe up that she doesn’t trust Adam. Later, Chelsea will return to Nick’s place and fret about keeping Connor away from Adam. She’ll confess it’s becoming more difficult to justify since Adam is Connor’s father.

However, Chelsea will sense that it’s a sensitive issue due to the custody battle over Christian Newman (Jude and Ozzy McGuigen). She’ll be forced to shift gears once Paul Williams (Doug Davidson) shows up with autopsy updates. He’ll note that more tests will have to be done. They haven’t confirmed that Calvin died of natural causes, but Chelsea will wonder what else he would’ve died from.

Paul will suggest that nothing can be ruled out yet, so he’ll be in touch tomorrow. Once Paul exits, Chelsea will worry that she’s become a suspect. Nick will point the finger at Adam and his motive, but Chelsea won’t want to believe Adam’s capable. Meanwhile, Adam will order Kevin Fisher (Greg Rikaart) to look into the autopsy results. Kevin will learn that the toxicology report was declared inconclusive.

At Society, Jill Atkinson (Jess Walton) will confront Billy Abbott (Jason Thompson) and Victoria Newman (Amelia Heinle) about her missing invitation. She’ll be miffed that she wasn’t included in the recommitment ceremony guest list and had to see the pics online. After Victoria heads out, Billy will offer an apology to Jill.

Y&R spoilers say Jill will also feel like something strange is going on with Esther Valentine (Kate Linder). She’ll try to make sense of things while Victoria gives instructions over the phone. Once she tells her minion to keep digging, Victoria will fill Victor Newman (Eric Braeden) in on her Dark Horse takeover plans. Victor will think Victoria’s got the right idea, but he’ll warn his daughter to throw everything she’s got into this.

Nearby, Lola Rosales (Sasha Calle) will listen to Mariah Copeland’s (Camryn Grimes) suggestion. Tessa Porter (Cait Fairbanks) will help Mariah convince Lola to do some cooking videos. They’ll think if Lola posts some signature recipes online, she could get a cooking show out of it.

After Lola gets on board, they’ll all head back to Lola and Kyle Abbott’s (Michael Mealor) apartment. Celeste Rosales (Eva LaRue) will be on hand to criticize Lola’s outfit and question the whole thing. Mariah will defend the idea before shooting some footage, but Lola will struggle. They’ll eventually call Kyle over to put Lola at ease, which will work like a charm.

Unfortunately, The Young and the Restless spoilers say Celeste won’t be able to keep her mouth shut. Lola will feel like her mom makes everything about her. She won’t appreciate the constant criticism she’s received since Celeste hit town. After Lola rants, an angry Celeste will opt to move back to the GCAC.

Over with Victoria again, she’ll tell Billy that Phyllis Summers (Michelle Stafford) may be stabbing Adam in the back. Victoria will have some suspicions regarding the hotel Dark Horse is building. She’ll decide to give Adam a heads-up, but he’ll urge her to let Phyllis handle whatever the issue is. When Victoria implies that Adam’s too trusting, he’ll argue that Phyllis is the one person not trying to take anything from him.

Other Young and the Restless spoilers say Jack will console a friend in need. Mallory will be distraught over her dad’s death at the memory care facility. Jack will provide comfort and bid Mallory farewell since she’ll be moving to be closer to her children. He’ll have a chat with Victor later, which will bring some minor jabs before Jack confides he had a rough day with Dina Mergeron (Marla Adams).

While Victor shows his support, Victoria will bring Billy up to speed on Adam shutting her down. Since Adam isn’t willing to listen, they’ll think he deserves any betrayals that head his way! We’ll keep you posted as other Y&R details emerge. Stay tuned to the CBS soap and don’t forget to check CDL often for the latest Young and the Restless spoilers, updates and news.