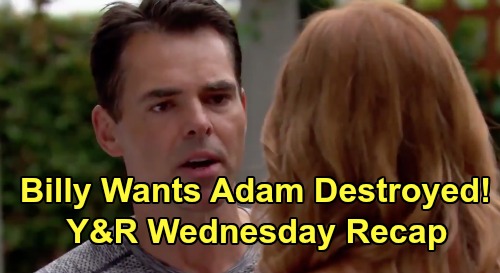 The Young and the Restless (Y&R) spoilers update and recap for Wednesday, July 17 tease that Michael Baldwin (Christian LeBlanc) will tell Nick Newman (Joshua Morrow) that he thinks they are ready to win the custody case against Adam Newman (Mark Grossman).

At the penthouse, Adam demands Kevin Fisher (Greg Rikaart) make a delivery to the judge in the custody case. Kevin glances at the packaging and shoves it back in Adam’s hand. Adam reminds Kevin about what’s at stake by reciting Chloe Mitchell’s (Elizabeth Hendrickson) address. Kevin finally takes it and mumbles to himself.

Cane Ashby (Daniel Goddard) and Traci Abbott (Beth Maitland) celebrate her book being done in New York. The Young and the Restless spoilers say that Cane worries about his son getting involved in the movie business, but Traci thinks it is exciting. Traci mentions that she has spent her whole life taking care of others and it’s time she takes care of herself. Cane agrees with her.

At the Chancellor mansion, Billy Abbott (Jason Thompson) is holding Delia Abbott’s (Sophie Pollono) doll when his mother, Jill Atkinson (Jess Walton) appears. Y&R spoilers state that she picks up the baby doll asking if he’s been thinking of his dead daughter.

Billy replies that he can’t get her out of his mind. Jill says she thinks of her granddaughter often but Delia would want her daddy to be happy. Jill encourages him to be the kind of man Delia wanted him to be.

After Jill leaves, Y&R spoilers state that Billy finds the word daddy written on the side table. Kevin enters the room and Billy asks him if he sees the word daddy on the table. Billy admits he had a dream about it and it’s here now.

The Young and the Restless spoilers say that Kevin wonders if Adam is messing with Billy. Billy thanks him and leaves. Kevin calls Chloe after taking a picture of the envelope he was ordered to deliver to the judge. He tells her the end is near—it won’t be long until they are together again.

Michael visits Kevin and questions his plans with Adam. Y&R spoilers say that Kevin tells him he will take Adam down without him. Michael worries that Kevin is in over his head.

At Dark Horse, Phyllis Abbott (Michelle Stafford) updates Nick on business and she begs him to drop the lawsuit with Nick. She thinks Christian Newman (Tobias twins) belong with him. Adam doesn’t like her advise and accuses her of still being hung up on Nick, to which she denies.

Later Adam runs into Nick at Society, who advised him to give up the custody case. Y&R spoilers say that Adam muses that Phyllis had the same advice. They argue and they both claim to have a lot of dirt on each other. Nick fumes that Adam claims to love Christian, but he’s willing to turn his life upside down.

Billy runs into Phyllis in the park and he drills her about her affiliation with Adam. Y&R spoilers say that she claims she is using him and it’s impossible for him to get in her head. Billy begs her to hurry up and get away from Adam because he’s worried about her.

It sounds like neither Adam nor Nick is willing to give in on the custody case. Next week, we’ll find out who will take custody. Don’t forget to come back to CDL for more The Young and the Restless (Y&R) spoilers, news, and casting updates!