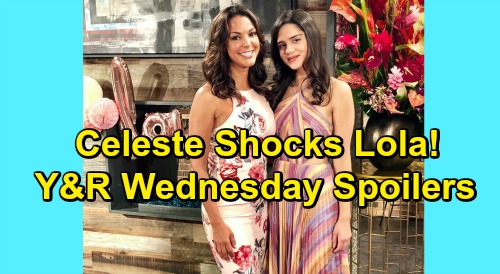 The Young and the Restless (Y&R) spoilers for Wednesday, June 26, tease that Lola Rosales’ (Sasha Calle) bridal shower will get underway. As Lola’s maid of honor, Abby Newman (Melissa Ordway) will hope she’s anticipated every problem. She’ll want this gathering to be perfect, so she’ll try to prevent any disasters and set up some nice surprises for Lola.

Alas, there’s one snag Abby didn’t count on and that’s Summer Newman (Hunter King). Summer will hear about this little shindig and decide to head on over. She’ll play dumb about the whole thing and likely suggest she was just popping in for a drink. Abby will think Summer needs to skedaddle, but Lola will encourage her liver donor to stick around and enjoy the party.

Summer will join Abby, Lola, Mariah Copeland (Camryn Grimes), Tessa Porter (Cait Fairbanks), Elena Dawson (Brytni Sarpy) and Ana Hamilton (Loren Lott) for this get-together. However, there’ll be one more guest who arrives after the others. The Young and the Restless spoilers say Lola’s mother, Celeste Rosales (Eva LaRue), will stun her daughter when she walks through the door.

Abby will reveal that she arranged this shocker, so Lola should be grateful. She’ll be thrilled to catch up with her mom, but fears may creep in the back of her mind. Celeste will definitely cause some drama during her stint, so Y&R fans won’t want to miss the trouble ahead. Lola and Kyle Abbott (Michael Mealor) will have to fight for their future.

As for Summer, she’ll drop a bomb before the party dies down. Fortunately, it seems it’ll be a pleasant one. Summer will even leave herself taken aback by the gesture she makes on Wednesday. Of course, Summer’s nice streak can’t last forever!

Other Young and the Restless spoilers say Jack Abbott (Peter Bergman) will see things from a new point of view. Could that have something to do with his love life? Jack has shown an interest in Mallory (Wendy Benson Landes), but she’s clearly a throwaway character. Y&R is getting Jack back in the dating game, but he may see that Mallory isn’t the gal for him.

Thankfully, there are plenty of fish in the sea. Jack will undoubtedly find his perfect match sooner or later, so that’s something to look forward to. We’ll give you updates as other Y&R news comes in. Stay tuned to the CBS soap and don’t forget to check CDL often for the latest Young and the Restless spoilers, updates and news.