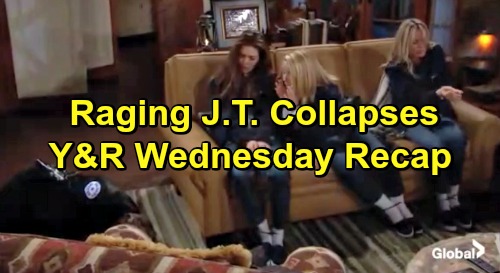 The Young and the Restless (Y&R) spoilers for Wednesday, March 20, tease that Nick Newman (Joshua Morrow) and Billy Abbott (Jason Thompson) will battle frustration when their target’s a no-show. J.T. Hellstrom (Thad Luckinbill) won’t be taking the bait, so they’ll grow concerned. Of course, they don’t realize J.T.’s already at the cabin. He’s ready to take on the ladies and cause more chaos.

Meanwhile, J.T. will encounter the second guard, who’ll be standing over the unconscious one J.T. stole a uniform from. After J.T. bashes the guy in the head, he’ll listen as Victoria Newman (Amelia Heinle) steps out to see if anyone’s there. Next, The Young and the Restless spoilers say Victoria will speak with Nick over the phone. She’ll hear about the snag and vow to stay put with the others.

Later, the power will cut off. When Victoria realizes the phone has vanished, she’ll start to panic. J.T. will smash that phone outside with his gun as the women arm themselves. Victoria, Sharon Newman (Sharon Case) and Nikki Newman (Melody Thomas Scott) will grab whatever they can, so Nikki will naturally pick the fireplace poker!

The ladies will step out of the cabin as Victoria shouts a warning. They’ll decide they’d better make a run for it, but they’ll be too late. Y&R spoilers say J.T. will greet them back inside. Over with Phyllis Summers (Gina Tognoni), she’ll urge Victor Newman (Eric Braeden) to see that she betrayed the cover-up crew to protect them. Soon after, a news report on the fugitives will leave them both shocked.

Other Young and the Restless spoilers say Rey Rosales (Jordi Vilasuso) will lie to Christine Williams (Lauralee Bell). He’ll insist that he’s doing whatever it takes to bring the women back into custody, but Christine won’t know if she buys that. Once Victor shows up at the police station to rant, he’ll get updates on the plan to trick J.T. and end this nightmare.

At Victoria’s house, Phyllis will pester Billy about what’s going on with Nikki, Victoria and Sharon. She’ll want to offer assistance in some way, but Billy will shut down her attempts to help. Phyllis will end up following Billy to the cabin, where a showdown will be in progress.

J.T. will let the ladies know he’s been keeping tabs on him ever since he nearly died. He even followed the prison transport van, which is how he found them for this confrontation. J.T. will hand over some cables to tie around their hands and ankles. He’ll also rant about being buried alive and reveal that his weight along with the dirt broke a drain pipe. A sewage system ride saved J.T.’s life.

J.T. will scowl in pain as he holds his head, but he’ll shake it off and aim his weapon. Victoria will bring up Reed Hellstrom (Tristan Lake Leabu) and how he thought his dad abandoned him. That’ll just anger J.T. even more, but he’ll stop again and mention the pain to his head.

Back with Phyllis, she’ll approach Billy near the cabin and insist that she’s not leaving. That’s good since the women are going to need some help! J.T. will go ballistic back inside. After he breaks things around the room, a gas leak will emerge from the fireplace. J.T. will suddenly collapse as Nikki, Victoria and Sharon cough from the terrible fumes.