BY Heather Hughes on April 30, 2019 | Comments: one comment
Related : Soap Opera, Spoiler, Television, The Young and the Restless 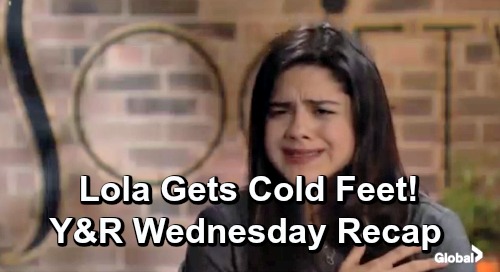 The Young and the Restless (Y&R) spoilers for Wednesday, May 1, tease that Ana Hamilton (Loren Lott) will grill Devon Hamilton (Bryton James) about his love life. She’ll wonder what’s going on between Devon and Elena Dawson (Brytni Sarpy). Devon won’t feel like dating should even be on his mind right now, but Ana will think Neil Winters (Kristoff St. John) would want him to find happiness.

Soon after, Tessa Porter (Cait Fairbanks) will arrive along with Mariah Copeland (Camryn Grimes). After checking on Devon, they’ll all discuss the brick incident at Crimson Lights. Mariah won’t think she needs any extra security, so they’ll get down to business. Tessa will sign her new contract and go over some plans that Ana has in mind. Unfortunately, Mariah won’t like any of them.

Ana will suggest a new look to help Tessa distance herself from her plagiarism scandal. She’ll think it’s important to start fresh, but Mariah won’t want the essence of who Tessa is getting lost in all that. Later, Mariah will feel left out when Ana warns that only Tessa and the musicians should be in the studio. Mariah pretend it’s all good, but her expression in the elevator will tell a different story.

At Society, Lola Rosales (Sasha Calle) will bring Abby Newman (Melissa Ordway) up to speed on “Skyle” getting a divorce. Abby will think Kyle Abbott’s (Michael Mealor) making the right call. She’ll be taken aback to learn Summer Abbott’s being pretty mature about it.

Talk will turn to the surprise Kyle has in store for Lola. After Lola brings up their suite later and what might happen, Abby will get the picture. She’ll sense that Lola’s nervous about having sex for the first time, so she’ll try to ease Lola’s mind. Abby will think that love and trust are all that matter here.

Other Young and the Restless spoilers say Cane Ashby (Daniel Goddard) will have some difficult updates for Jill Atkinson (Jess Walton). He’ll mention that Lily Ashby (Christel Khalil) left and provided new divorce papers to sign. Jill won’t think it’s a good idea to cling to hope, but Traci Abbott (Beth Maitland) will pop up and wonder why not.

Y&R fans can expect Jill to grumble. She’ll feel like Cane can lean on her now, so she won’t see any need for Traci’s help. However, they really don’t have to compete as confidant, so Cane will make that clear. After turning down Jill’s dinner invitation, Cane will head to the park for reflection. He’ll eventually call Lily to leave her a message about letting go, which will end with an emotional goodbye.

Meanwhile, Traci will chat with Jill a bit more. Jill will admit it’s nice that Cane can turn to Traci when she’s not around. She’ll appreciate the support Traci’s offered, but she’ll disagree on the issue of hope for “Lane. Later, Traci will work on her book about a heartbroken man.

Back with Kyle, he’ll lead Lola up to the rooftop of Society. Once Lola’s blindfold is removed, she’ll see a Miami beach scene and declare that it’s perfect. Meanwhile, Devon’s dinner with Elena will take some interesting turns. She’ll admit that her mother died, but it isn’t something that’s easy for her to talk about.

Elena and Devon will also share a laugh over the first concerts they ever attended. Devon will get distracted as he imagines Hilary Hamilton (Mishael Morgan), but he’ll ultimately focus on Elena again. It sounds like the dating process will be a tricky one for Devon, but Elena seems like the kind of gal’s who’s worth it.