BY Heather Hughes on May 14, 2019 | Comments: 3 comments
Related : Soap Opera, Spoiler, Television, The Young and the Restless 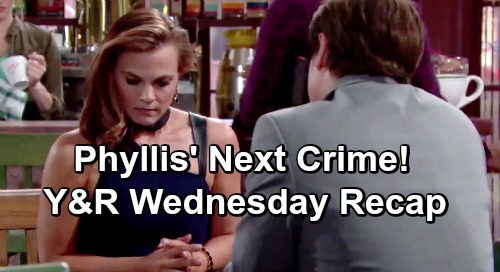 The Young and the Restless (Y&R) spoilers and recap for Wednesday, May 15, tease that Rey Rosales (Jordi Vilasuso) will angrily hurl accusations at his ex. At the hospital, Rey will doubt that Mia Rosales’ (Noemi Gonzalez) Braxton-Hicks contractions were real. He’ll think Mia was just making up a baby crisis to avoid being arrested by Paul Williams (Doug Davidson).

As Mia denies it, Arturo Rosales (Jason Canela) will get involved. It won’t take long for Rey to realize Mia and Arturo are together now. The Young and the Restless spoilers say Rey will ultimately shift gears and demand a paternity test. After the brothers’ cheeks are swabbed, they learn the results will take 24 hours. Arturo will insist that the baby will having a loving father and uncle no matter what.

In Chancellor Park, Kyle Abbott (Michael Mealor) will explain all the reasons why living with Lola Rosales (Sasha Calle) is a good idea. She’ll agree until she figures out home will be on the Abbott property. Kyle also won’t approve of moving in Arturo’s apartment after he’s gone. They’ll debate a bit, but Kyle will eventually assure Lola that they can live anywhere as long as they’re together.

At Jabot, Phyllis Summers (Gina Tognoni) will get a shock from Jack Abbott (Peter Bergman). Thanks to the little stunt she pulled, she’s got herself some competition. Jack will insist that he’s adding accessories without her, but Phyllis will warn that he’ll regret it. She’ll take a pic of the Jabot Collective logo as she exits.

Other Y&R spoilers say Nick Newman (Joshua Morrow) will deliver stunning news to Summer Abbott (Hunter King). He’ll reveal that Adam Newman (Mark Grossman) is alive, so Summer will immediately grow concerned about Christian Newman (Jude and Ozzy McGuigen). Next, Phyllis Summers will barge in. She’ll be furious with Summer for ratting her out to Jack.

Summer proved her loyalty by revealing that her mom tried to access company files. Naturally, Phyllis will rant about Summer’s betrayal. Once Nick gets the scoop, he’ll think Phyllis has hit another low. However, Phyllis will point out Nick that accessed Newman’s files to start Dark Horse. The pot’s calling the kettle black here, so Nick needs to zip it.

Before Summer exits, she’ll fill Phyllis in on Adam’s survival. That’ll give Phyllis and Nick something to else to talk about. Once they address the surprising situation, Nick will turn Phyllis’ attention back to her messed-up life. He’ll think Phyllis needs to make her own way instead of using other people to fix it. After Phyllis heads out, Nick will look pensive as he gazes at Christian’s photo.

Back with Summer, she’ll tell Jack that Kyle isn’t making this a team effort. Summer will insist it’s nothing personal, but she won’t think they’re the right duo to move this project forward. Once Jack promises to talk to Kyle, Summer will give Theo Vanderway (soon-to-be Tyler Johnson) a call. She’ll push him to make a return trip to Genoa City, so perhaps Summer is recruiting her new partner.

Meanwhile, Jack will receive an invite to Ashley Abbott’s (Eileen Davidson) big launch in Paris. He’ll toss it out with a laugh, so it’s clear Jack isn’t interested in watching Ash succeed. At Society, Lauren Baldwin (Tracey E. Bregman) will comment on Traci Abbott’s (Beth Maitland) beautiful glow. She’ll think it seems like Traci’s in love, but Traci will insist that the single life is just fine.

Later, Cane will meet up with Traci and mention a letter he received from Lily Ashby (Christel Khalil). Traci will downplay the significance before returning home to continue her novel. Traci will cast herself in the story this time. She’ll be the secretary who assures Flynn (Daniel Goddard) that pursuing Iris (Christel Khalil) will only bring more heartbreak.

Soon after, Cane will show up with a suggestion for Traci’s story. After he passes it along, Traci will suddenly imagine he’s shirtless. She’ll play off her rattled reaction as being excited about Cane’s idea. Over with Michael Baldwin (Christian LeBlanc), he won’t support Lauren’s plan to play Cupid for Jack.

Later, Phyllis will meet with Michael and fish for answers about anonymous shell companies. He’ll realize she plans to peddle counterfeit Jabot products, so he’ll try to shut that down. Finally, The Young and the Restless spoilers say Michael will get the usual “Adam is alive” news. That’s sure to be the talk of the town for quite a while!

It sounds like another hot episode’s coming up. We’ll give you updates as other Y&R details emerge. Stay tuned to the CBS soap and don’t forget to check CDL often for the latest Young and the Restless spoilers, updates, and news.