BY Heather Hughes on May 21, 2019 | Comments: one comment
Related : Soap Opera, Spoiler, Television, The Young and the Restless 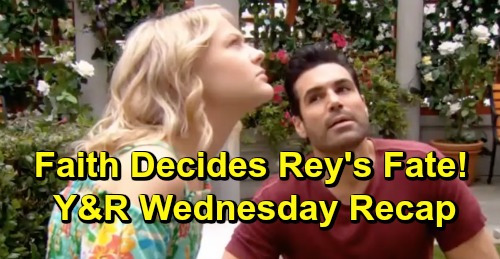 The Young and the Restless (Y&R) spoilers for Wednesday, May 22, tease that Billy Abbott (Jason Thompson) will stop by Delia Abbott’s (Sophie Pollono) grave. He’ll chat about his recent camping trip with Victoria Newman (Amelia Heinle) before mentioning Adam Newman’s (Mark Grossman) return. Things were easier when Adam was supposedly dead, but now all Billy’s anger is bubbling up again.

Next, Y&R spoilers say Billy will head over to Newman Enterprises. He’ll bicker with Victor Newman (Eric Braeden) about bringing Adam back to Genoa City. Billy will assume the move was driven by guilt. Victor will flip the situation around and wonder what Billy would do if he could get Delia back. However, Billy won’t think it’s right to compare Delia to someone as destructive as Adam.

At the hospital, Victoria Newman (Amelia Heinle) will want the scoop. She’ll grill Adam about his agenda and ask what Victor offered him. Adam will table this discussion until he can speak with Victoria and Nick Newman (Joshua Morrow) together. He’ll push Victoria to let him recover a bit more and make sure his shooter is apprehended.

Victor will show up to see Adam soon after. He’ll insist that Adam has to take his life back in his hands, but he won’t elaborate on what he has in mind. The Young and the Restless spoilers say Victor will want Adam released ASAP, so he’ll find a doctor in hopes of making it happen. Once he’s alone, Adam will get a text from his secret partner. It’ll let him know a fall guy was found.

At Devon Hamilton’s (Bryton James) penthouse, Jett Slade (Gilbert Glenn Brown) will be anxious to stage a full comeback. Elena Dawson (Brytni Sarpy) will fear that Jett could lose his voice permanently this time. She won’t want Jett to push himself too hard.

The Young and the Restless spoilers say Michael will pop in for an important discussion. He’ll bring up Neil Winters’ (Kristoff St. John) will and contend that Devon can’t keep ignoring it. Devon won’t know if he’s ready for this kind of closure, but Michael will reassure him as both a lawyer and a friend.

At Sharon Newman’s (Sharon Case) place, she’ll give Rey Rosales (Jordi Vilasuso) a warning. Tween girls can be tricky to handle. Faith Newman (Alyvia Alyn Lind) will waltz downstairs and suggest that Rey needs to impress her once they get outside. They’ll play around with a drone as Faith worries about her mom and the men she’s been with.

Rey will get where Faith is coming from and offer some kind words. Once Sharon appears, Faith will suggest she’s cool with Rey. She’ll contend that Rey might as well move in, but Rey will sense trouble behind that statement. He’ll apologize to Sharon for any issues he might’ve caused. Sharon will think it’ll all work out once Faith gets used to Rey, so he’ll confess he’s not scared off by the idea of moving in.

Later, Faith will return with an apology. She’ll admit that maybe happiness for the three of them could be possible. At Crimson Lights, Kyle Abbott (Michael Mealor) and Lola Rosales (Sasha Calle) will do some online apartment hunting. When Rey walks in, he’ll be surprised they’re moving in together so fast. Rey will wonder if the divorce is even finalized, but Kyle will try to put Rey’s worries to rest.

After Lola promises Rey this is what she wants, she’ll head off to check out a rental place with Kyle. That’ll leave Rey to call Sharon and wonder how she feels about the whole moving in thing. Sharon will admit she likes that plan, so it looks like this move-in will happen soon enough.

Back with Elena, she’ll face more worries about Jett’s health. Elena will consider leaving with Jett if he goes on tour, but she’ll ultimately decide to stick around. Devon will be ready to do some planning for the future. Finally, a call about scheduling Neil’s will reading will come in. That should drag the mood down a bit, but this has to be done.