BY Heather Hughes on May 21, 2019 | Comments: Leave Comments
Related : Soap Opera, Spoiler, Television, The Young and the Restless 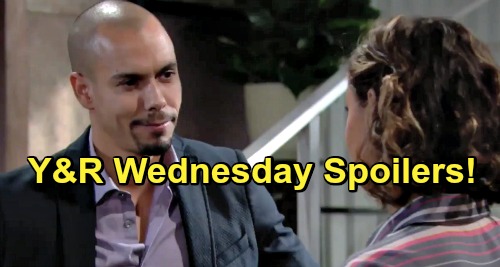 The Young and the Restless (Y&R) spoilers for Wednesday, May 22, tease that Victor Newman (Eric Braeden) will once again defend his son. Now that Adam Newman (Mark Grossman) has his memories back, Billy Abbott (Jason Thompson) will be even more outraged. Just knowing Adam recalls his past will be enough to stir up extra anger over Delia Abbott (Sophia Pollono) and everything else.

Of course, Victor can understand why Billy would hold a grudge, but he won’t think that gives him a right to harass Adam. Billy lost a child and that’s something no parent ever gets over, but he acts like Adam flat-out murdered Delia. The truth is Delia’s death was an accident, so Victor will hope Billy’s willing to back off. Perhaps avoiding Adam would be the best choice Billy could make right now.

However, Billy won’t see any reason why he shouldn’t make Adam as miserable as possible. He’ll want to stay close and protect Victoria Newman (Amelia Heinle), so he’s not going to fade to the background. Billy will grow increasingly hostile during this meeting with Victor. That’ll naturally bring Victor’s hostile side out as well. Y&R fans can expect plenty of conflict in Wednesday’s exciting episode.

Across town, reality will hit Sharon Newman (Sharon Case) hard. She may start to process what Adam’s newly returned memories could mean for Nick Newman (Joshua Morrow) and his boy. Christian Newman (Jude and Ozzy McGuigen) knows Nick as his dad and doesn’t deserve to be ripped out of his home. That’s already happened far too much in Christian’s short life.

Reality could involve remembering Adam’s dark side and Victor’s control. Sharon may force herself to admit that Adam can be a bit of a wild card. Can Adam truly be trusted? Apparently not since he’s keeping some huge secrets, including a mysterious partner no one knows about! Nevertheless, it looks like Sharon will stay out of the loop on that for now. She should remain in Adam’s corner for a while.

We should also mention Sharon’s big decision. That could tie in with her reality check as well. Rey Rosales (Jordi Vilasuso) will want to move in together soon, so Sharon will have to decide if she’s all in or plans to pump the brakes.

Other Young and the Restless spoilers say Elena Dawson (Brytni Sarpy) will grow closer to Devon Hamilton (Bryton James). Their warm moments will push them together and help them connect on a deeper level. “Elevon” will move forward, but Devon will soon be hit with more challenges.