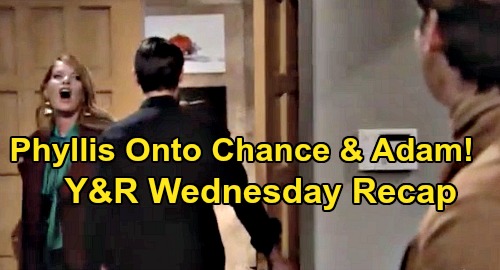 The Young and the Restless (Y&R) spoilers recap for Wednesday, November 13, teases that some surprises are on the way. Before we dive in, we should mention that all four soaps will be preempted for impeachment hearing coverage. That means Wednesday’s Y&R episode will likely be pushed to Thursday, November 14. Now let’s get to what’s happening in this action-packed show.

First, Abby Newman (Melissa Ordway) will be stuck cleaning up the latest Grand Phoenix mess. As if the Molly grand opening debacle wasn’t bad enough, now Abby has to do damage control over a hostage situation. Abby will do her best to assure everyone the hotel is perfectly safe, but guests will still be checking out by the droves.

At Crimson Lights, Phillip “Chance” Chancellor IV (Donny Boaz) will grill Amanda Sinclair (Mishael Morgan). He’ll want to know more about the mystery surrounding Katherine Chancellor’s (Jeanne Cooper) contested will. Amanda will suspect that the will drama and Simon Black (Jeffrey Vincent Parise) chaos could be connected. She’ll admit she was contacted by someone claiming to be Chance via email.

Chance will think Amanda was brought into this specifically because she looks just like Hilary Hamilton (Mishael Morgan). He’ll assure Amanda that he’s going to keep digging for the whole truth. Amanda will confess that she did have one phone conversation with the fake Chance, who sounded older than Amanda thought he’d be.

After Chance exits, Nate Hastings (Sean Dominic) will approach Amanda to make sure she’s holding up OK. At Adam Newman’s (Mark Grossman) penthouse, Connor Newman (Judah Mackey) will still be shaken up over the hostage crisis. Adam and Chelsea Lawson (Melissa Claire Egan) will try to convince Connor that he’s safe now, but Connor will remain agitated. He’ll want a security blanket that he hasn’t used in years.

While Adam promises to retrieve the blanket from Nick Newman’s (Joshua Morrow) house, Nick will be busy talking to Jack Abbott (Peter Bergman). Although Nick still doesn’t have an explanation, he’ll point out that Chelsea promised to fill him in later. Jack will note that when it comes to the campaign, they need to get ahead of this quickly.

The Young and the Restless spoilers say Jack will take off just as Adam’s arriving. Nick will learn the reason for Adam’s visit, but he’ll refuse to give Adam the blanket. He’ll want to hear about Chelsea’s link to Simon first, but Adam will shut down the discussion. They need to focus on Connor and not another round of fighting.

Nick will finally hand over the blanket, so Adam will return home with it soon enough. He’ll see that Connor’s asleep when he enters, so he’ll take the kid up to his room. Once Adam comes back down, he’ll complain about Chelsea’s keeping him the dark on what was going on. Their son paid the price for that, so they have to trust each other moving forward. Chelsea will get emotional and assure Adam she’s on the same page.

At Adam’s urging, Chelsea will head home to explain the ordeal to Nick. She’ll be apologetic, but she’ll feel like she had to keep Nick out of that nightmare. Although Nick will promise he’s not worried about his campaign, Chelsea will realize this could be a major blow.

At Jabot, Summer Newman (Hunter King) will talk to Kyle Abbott (Michael Mealor) about Theo Vanderway’s (Tyler Johnson) new family connection. After Kyle gripes, Summer will suggest she doesn’t want to choose a side. Talk will turn to their new skincare line, which Kyle’s been testing. Summer will joke about how Kyle’s glowing and share a laugh with him as she feels his face.

Naturally, Lola Abbott (Sasha Calle) will walk in at that exact moment. Summer will take that as her cue to leave, so Kyle will kiss Lola and be grateful he has his perfect match. Afterward, Kyle and Billy Abbott (Jason Thompson) will get into a heated argument as usual. When Jack shows up, he’ll blast both of them and warn them to figure this out together.

At the Abbott mansion, Ashley Abbott (Eileen Davidson) will be back and ready to speak with Theo. They’ll bond over not being related to the Abbotts by blood and feeling like outsiders. After Theo speaks about his influencer agency, Ashley will push him to come work for her in Paris. She’ll do her best to sell Theo on the idea, and he’ll confess he’s flattered.

Back with Abby, she’ll keep trying to undo the Grand Phoenix nightmare with Phyllis Summers’ (Michelle Stafford) help. Once Chance arrives, he’ll let Abby know it’s great to see her again. They’ll have a flirty conversation before Nate joins them briefly. After Nate excuses himself, Chance will ask Abby to have a drink with him later.

In the meantime, Lola will catch up with Abby. She’ll note that Summer made a beeline for Jabot as soon as she returned to GC. Speaking of Summer, she’ll find herself at the Grand Phoenix as well. After Summer teases Theo about what his last name should be now, they’ll make love in a suite.

Finally, The Young and the Restless spoilers say Jack will unleash his fury. He won’t be happy when Ash updates him on her offer to Theo. Jack will snap that they’re all just getting to know Theo, but she’ll think the move to Paris would be in Theo’s best interest.

At Adam’s penthouse again, he’ll get a visit from Chance. After Adam thanks Chance for saving Connor, he’ll allude to the messes they keep getting into. Suddenly, Phyllis will arrive and point out that she suspected they’d be there together.

It sounds like Phyllis’ curiosity is growing! We’ll keep you posted as other Y&R news comes in. Stay tuned to the CBS soap and don’t forget to check CDL often for the Young and the Restless spoilers, updates and news.