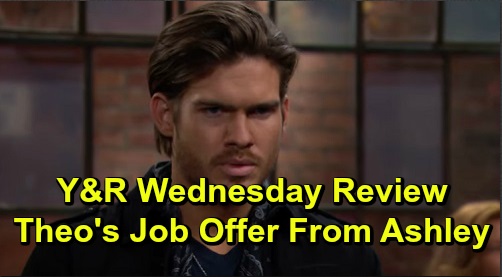 The Young and the Restless spoilers review for Wednesday, November 13, tease that Chance Chancellor (Donny Boaz) will meet with Amanda Sinclair (Mishael Morgan) at Crimson Lights. He’ll have some questions about the circumstances surrounding her involvement in contesting Katherine Chancellor’s (Jeanne Cooper) will. Amanda will quickly figure out that Chance thinks the will and Simon Black (Jeffrey Vincent Parise) are linked.

Amanda will say that she was emailed by someone who said he was Chance and put on retainer, and she’ll be dismayed to learn that Devon Hamilton (Bryton James) was right and she was being played. Chance will say that she shouldn’t beat herself up because it happens to people all the time – especially when people are going through personal issues. That seemed to strike a chord with Amanda.

Chance will believe that Amanda’s resemblance to Hilary Hamilton (Mishael Morgan) is why she was retained by whoever it was who was impersonating him. He’ll vow to get to the bottom of it, and Amanda will relay that she did have one phone conversation with the person pretending to be him, and that he seemed older than she expected.

Later, Chance will head to The Grand Phoenix, where he’ll thank Abby Newman (Melissa Ordway) and Phyllis Summers (Michelle Stafford) for all their help in the hostage standoff, but it seems that he’ll actually be there to connect with Abby. The two will immediately hit it off, and eventually they’ll decide to have a drink together later.

Meanwhile, Ashley Abbott (Eileen Davidson) will greet Theo Vanderway (Tyler Johnson), who will have come to the Abbott estate looking for Jack Abbott (Peter Bergman). They’ll immediately hit it off, and she’ll tell him about John Abbott (Jerry Douglas) not being her father and how they have a lot in common. After an enthusiastic discussion of Theo’s career managing influencers, Ashley will impulsively offer him a job with her in Paris.

Theo will be flattered and amazed, and he’ll decide to take some time to think about it, but he’ll clearly be enchanted by the idea. Later, Jack will be astonished that Ashley offered him a job so far away from the family, but Ashley will think that would be best for Theo and that he wouldn’t have to live under a cloud of suspicion there.

Next, Chelsea Lawson (Melissa Claire Egan) will face the music with both Adam Newman (Mark Grossman) and Nick Newman (Joshua Morrow). This will come after she and Adam work to calm down Connor Newman (Judah Mackey), who will be very agitated and unsettled after the hostage situation. Chelsea and Adam will reach an understanding about putting Connor’s needs first, and Adam will be sorry that Chelsea felt that she couldn’t come to him when everything with Simon was going down.

Finally, Chance will arrive at Adam’s place and Adam will thank him for saving Connor’s life. Adam will remark that it seems like the two of them are always walking into messes, when the doorbell rings and Phyllis will barge in, saying she had a sneaking suspicion that the two of them would be together. Of course, it’s still a bit unclear what Phyllis knows about Adam and Chance’s Las Vegas connection and the “messes” they were involved in there.