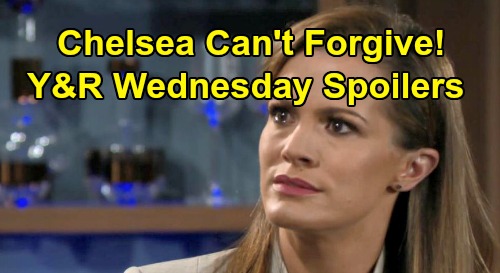 Chelsea feels like Nick broke the trust between them, which is bad enough, but she’s really upset that Connor Newman (Judah Mackey) has been hurt throughout this whole deal. After all, Connor was not only led to believe that his grandfather passed away, but he also had to face Adam Newman’s (Mark Grossman) sudden departure from his life.

Connor was absolutely devastated when Adam left, and Chelsea knows that Adam wouldn’t have left but for the ruse about Victor’s death. It looks like Nick may try to make things right on Wednesday’s episode, but Y&R spoilers say it doesn’t look like Chelsea will be forgiving him anytime soon. In fact, this could be a serious blow to their relationship.

Meanwhile, Nikki Newman (Melody Thomas Scott) will take charge of a situation. She’s been through a lot lately trying to maintain the ruse that Victor was dead, and it was something that she probably would rather not have done. As life gets back to normal now that Victor is back in action, Nikki may find herself needing to set some people straight.

Phyllis Summers (Michelle Stafford) is someone who may need a talking to, given how upset she is over Summer Newman (Hunter King) being kept in the dark over Victor’s “death.” Nikki might let Phyllis know that it’s actually her own fault that Summer wasn’t told about the ruse about Victor’s death, and that if she wants to lay blame anywhere, it should be on herself.

Finally, Jack Abbott (Peter Bergman) will oversee some big changes at Jabot. He’s made some strides in his personal life lately, as he went on his trip to Sedona to “find himself.” He’s done a lot of self-reflecting and actually gained some insight about his family and in particular about some of Dina Mergeron’s (Marla Adams) decisions throughout the years.

Well, according to The Young and the Restless spoilers Jack will take a step back at Jabot. He was really happy with how Kyle Abbott (Michael Mealor) handled things when he was on his trip, so perhaps he’ll give Kyle and others some more responsibility as he focuses on other areas of his life. As Y&R viewers know, Jack and Traci Abbott (Beth Maitland) will be putting their energies into writing the Abbott family story, so he’ll probably want to focus on that for the time being.