The Young and the Restless Spoilers: Wednesday, October 23 Review – Connor Gets His Way, Goes To Live With Dad – Devon’s Big Decision 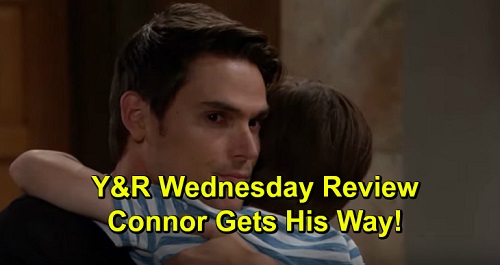 The Young and the Restless spoilers review for Wednesday, October 23, tease that Adam Newman (Mark Grossman) and Nick Newman (Joshua Morrow) will arrive at Nick’s place, and Adam will be anxious to see Connor Newman (Judah Mackey). Connor will be asleep on the couch sporting a cast, and he’ll wake up as Adam sits next to him.

Chelsea will agree that he can stay with Adam, with Nick incredulous about what’s just happened. Connor will be thrilled and will go to pack, and once he’s out of the room, Chelsea will insist that this is temporary and she’s not agreeing to give Adam custody. Adam will understand, but Nick won’t, and the men will start arguing before Chelsea shuts them down.

Adam will then head to his penthouse, where he’ll encounter Phyllis Summers (Michelle Stafford) and promptly tell her that he’s moving back in and she needs to leave. She’ll be stunned to learn that Connor will be moving in. Soon, Connor and Chelsea will arrive, and Phyllis will take off. Connor will be excited to be there, and he’ll barely give his mom the time of day as she tries to say goodbye. Adam will promise Chelsea that he’ll be the father that their son deserves.

Connor and Adam will enjoy their first evening together in the penthouse, but later the talk will turn serious. Connor will tell Adam that he was afraid he was never coming back, and Adam will again reassure Connor that he never stopped loving him. Adam will sign Connor’s cast and tell him that from now on, they’re going to be inseparable.

One wonders how Chelsea is ever going to get Connor back after relinquishing him to Adam. Granted, she said that it was just a temporary situation, but it’s pretty clear that Connor sees it as permanent. Will Adam support Chelsea when it’s time for Connor to go back to Nick’s house? Time will tell, but it certainly feels like both Adam and Connor want Connor’s new living situation to be permanent.

Meanwhile, on the new episode of Y&R on Wednesday, October 23, Jill Abbott (Jess Walton) and Cane Ashby (Daniel Goddard) will head to Devon Hamilton’s (Bryton James) penthouse to share what they learned from the forensic document expert. They’ll arrive, along with Amanda Sinclair (Mishael Morgan), and Cane will show Devon the proof that the new pages represent Katherine Chancellor’s (Jeanne Cooper) true intentions.

Ultimately, they’ll all agree that Devon has a decision to make as to whether he should honor the version of the will as it was read, or if he should honor the new pages. Later, Devon will fill in Nate Hastings (Sean Dominic) and Elena Dawson (Brytni Sarpy) on the development, and he’ll note that this whole thing is really hard to take. He just won’t be able to fathom Katherine leaving her fortune to Cane of all people.

Of course, Devon is under no obligation to do anything at this point, since the statute of limitations for contesting the will have passed. But he will want some input on what, if anything, he should do. Y&R spoilers say that Lily Winters (Christel Khalil) will soon return and offer her input on the situation, and Devon will likely try to reach a solution that satisfies all parties.