BY Heather Hughes on October 29, 2019 | Comments: one comment
Related : Soap Opera, Spoiler, Television, The Young and the Restless 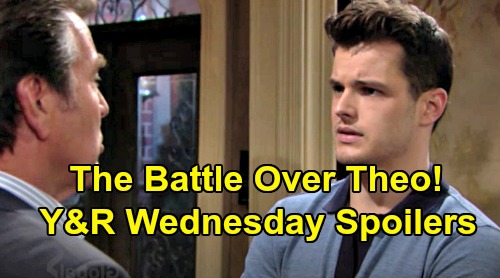 The Young and the Restless (Y&R) spoilers for Wednesday, October 30, tease that Jack Abbott (Peter Bergman) will get updates from Kyle Abbott (Michael Mealor). Kyle confirms Eric Vanderway (Jon Briddell) was Theo Vanderway’s (Tyler Johnson) father on Tuesday, so Wednesday’s episode should bring Jack up to speed. There’s a good chance Jack will want to tell Theo right away, but Kyle may warn against it.

Kyle knows Theo is a master manipulator, so he may worry his cousin will cause issues. Theo’s finally settled down a bit, but Kyle can’t let his guard down. He probably won’t want to rock the boat by adding family drama.

However, Jack may feel like they owe Theo the truth. Since Eric is dead, this could help Theo feel connected to him again on some level. Knowing his dad’s roots could be a source of comfort. The Young and the Restless spoilers say Jack and Kyle will clash, but we all know Jack will win this battle. There’s no way Theo will remain in the dark on a shocker like this.

Meanwhile, Billy Abbott (Jason Thompson) will embrace a new identity, but it won’t be his sinister alter this time. Instead, this should be a fun identity – a Halloween costume for trick-or-treating with the kids. Billy and Victoria Newman (Amelia Heinle) will go all out to make this a special evening for Johnny Abbott (Holden and Ryan Hare) and Katie Abbott (Sienna Mercuri).

Y&R fans will also see Nick Newman (Joshua Morrow), Christian Newman (Alex Wilson) and Chelsea Newman (Melissa Claire Egan) dressed up for the haunted holiday. It should be a fun night, but Billy’s dark side is bubbling just under the surface. He feels confident he has everything under control, but does he really? Now that Adam Newman’s (Mark Grossman) back in town, Billy could be at risk of snapping once more.

Other Young and the Restless spoilers say Nate Hastings (Sean Dominic) will seek legal advice. He’ll stop Amanda Sinclair (Mishael Morgan) from leaving Genoa City and hope she can help him out. Nate was part of Victor Newman’s (Eric Braeden) fake death plot, and now his lies are coming back to haunt him. His job may be on the line, so it sounds like Amanda will accept the case and try to get Nate out of trouble.

Nate and Amanda seem poised to become a couple eventually. Are you excited to see sparks fly or would you rather see them paired up with other people? We’ll keep you posted as other Y&R news comes in. Stay tuned to the CBS soap and don’t forget to check CDL often for the latest Young and the Restless spoilers, updates and news.