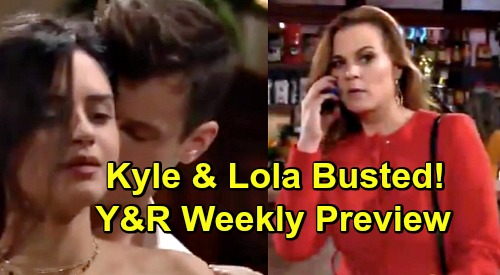 The Young and the Restless (Y&R) spoilers preview and video promo for the week of April 8-12 tease that some hot storylines will get even hotter. For starters, Sharon Newman (Sharon Case) will demand answers from Rey Rosales (Jordi Vilasuso). She’ll whip out the ultrasound photo Mia Rosales (Noemi Gonzalez) delivered and push Rey to start talking.

Rey will note that he’s not even sure the baby is his since Mia slept with Arturo Rosales (Jason Canela). It turns out the ultrasound photo is a phony, but Mia will still learn she’s actually pregnant this week. After a medical scare, Mia’s doctor will confirm it through her real ultrasound at the hospital.

Sharon will choose to stick with Rey despite the baby drama, but Mia’s got some tricks up her sleeve. The same goes for Phyllis Summers (Gina Tognoni). The Young and the Restless spoilers say Phyllis will take steps to protect Summer Abbott (Hunter King), but she could end up scoring herself an advantage.

Phyllis will decide to keep tabs on Kyle Abbott (Michael Mealor) and possibly Jack Abbott (Peter Bergman), too. She’ll order someone to do some spying for her, so things are about to get dangerous. Phyllis will insist she wants to know every move they make. She’ll contend that the Abbott boys are about to get what they deserve!

Kyle’s the one in the most trouble here since he’ll have a secret meeting with Lola Rosales (Sasha Calle). Lola will want to see what they could be together, so she’ll urge Kyle to get a room with her. He’ll take her up on the offer, so they’ll head upstairs to break Kyle’s marriage vows. It looks like a steamy “Kola” hookup is on the way.

Phyllis’ spy may get pictures of Kyle and Lola entering or leaving the room together. If so, that’ll leave her with a big decision. Will Phyllis tell Summer or use this info to blackmail Kyle? Based on Y&R’s weekly promo and what we know about Phyllis, blackmail seems like the better option – at least at first. Once Phyllis’ plot is complete, perhaps she’ll blab anyway and fill Summer in on what kind of man she married.

Meanwhile, Billy Abbott (Jason Thompson) will encourage Victoria Newman (Amelia Heinle) to give their relationship a chance. Victoria will feel like they’ve already tried and failed, but Billy will maintain that they have to try again. He’ll think what they share is too special to give up on, so he’ll kiss Victoria and hope for the best.