The Young and the Restless Spoilers: Week of August 12 Preview – Adam Attacks Victor Over Restraining Order – Chelsea Ready to Run 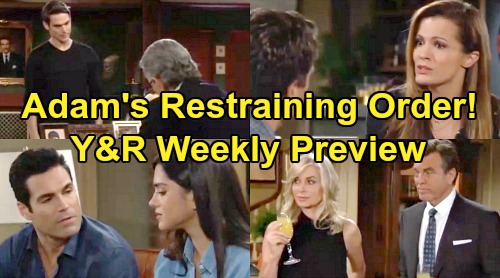 The Young and the Restless (Y&R) spoilers preview video promo for the week of August 12-16 teases that Adam Newman (Mark Grossman) will seethe over Victor Newman’s (Joshua Morrow) shocker. Adam will be served with a restraining order that morning, so he’ll march over to Victor’s office and demand some answers. This should be part of Victor’s attempt to support Nick Newman (Joshua Morrow) in the custody battle.

It sounds like Adam will be barred from getting too close to Nick, which will back up the idea that Nick was provoked into punching Adam. This could undo some of the damage with the judge and derail Adam’s plan to have his brother look like the problem here. It’ll look like Adam won’t stay away, so Nick was pushed to his limit.

Of course, Adam will plan to retaliate. He’ll assure Victor that he loves his sons and will do whatever it takes to raise them. That’s exactly what Chelsea Newman (Melissa Claire Egan) will be afraid of once the war starts getting ugly. Chelsea will also be rattled after staying the night at Adam’s place with Connor Newman (Judah Mackey). She may feel herself getting sucked back in and get spooked.

The Young and the Restless spoilers say Nick will face some familiar worries in the week ahead. He’ll feel like Chelsea might try to run, so he’ll remind her she promised to stay put. Nick will point out that things have changed and suggest Chelsea’s not the person she used to be. However, Chelsea will indicate that things have changed once again due to Connor. She’ll insist she just can’t lose her son.

Nick will work to talk Chelsea out of bailing, especially when they seem to be on the verge of something good. He’ll see the potential for a bright future together, so he’ll urge Chelsea to stick around and fight Adam with him. Over with Abby Newman (Melissa Ordway), she’ll put her romantic issues on hold to celebrate with some of the Abbotts. The Jabot-My Beauty merger is an exciting new chapter.

Now that Jack Abbott (Peter Bergman) and Ashley Abbott (Eileen Davidson) are teaming up, Abby will wonder what that means for her mom. She’ll ask if there’s any chance Ashley’s moving back to Genoa City. There hasn’t been any Y&R news about Eileen Davidson returning on a more permanent basis, but Ashley could still return home if Davidson remains up for regular appearances.

Finally, Lola Rosales (Sasha Calle) will get a letter from her dad, Adrian Rosales. She’ll show it to Rey Rosales (Jordi Vilasuso), who’ll wonder why their father would be writing Lola after all this time. Duh, Detective! Lola’s wedding is rapidly approaching, and Adrian already expressed interest in walking Lola down the aisle. She refused to even let her father attend, but Adrian might make a heartfelt plea in his note.

Regardless, it’s obvious based on the timing that Adrian wants to give Lola a message before her big day. It’ll be up to Lola to decide if she’s going to open the envelope and her heart. The Young and the Restless spoilers say some hot drama’s ahead. We’ll give you updates as other Y&R details emerge. Stay tuned to the CBS soap and don’t forget to check CDL often for the latest Young and the Restless spoilers, updates and news.