BY Heather Hughes on August 22, 2019 | Comments: one comment
Related : Soap Opera, Spoiler, Television, The Young and the Restless 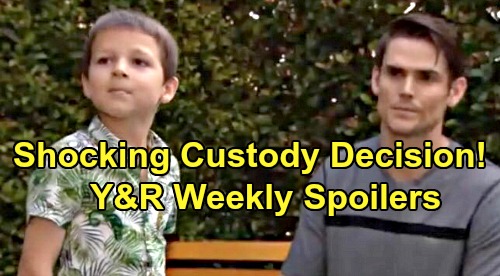 The Young and the Restless (Y&R) spoilers for the week of August 26-30 tease that the drama’s about to rev up in Genoa City. First, let’s talk about a battle that’s brewing. It’s almost time for Nick Newman (Joshua Morrow) and Adam Newman (Mark Grossman) to head back to court. Christian Newman’s (Alex Wilson) custody case will be revisited, so Brittany Hodges (Laura Woodland) will be on hand to help Nick.

Chelsea Newman (Melissa Claire Egan) will also do her part by appealing to Adam’s softer side. She’ll push Adam to see that staying with Nick is what’s best for Christian. Nick has been his dad for as long as Christian can remember, so Chelsea will think that’s the way things should remain. She’ll beg Adam to do what’s right and stop fighting Nick on this.

Whether Adam caves in or not, Nick will be awarded full custody of Christian. He’ll be over the moon once the war is finally over. In fact, Nick will be so happy that he’ll be in the mood to celebrate – and he’ll do it in the bedroom with Chelsea! The Young and the Restless spoilers say they’ll take a steamy step forward in their reunion.

Over with Phyllis Summers (Michelle Stafford), she’ll refuse to let Chelsea and Abby Newman (Melissa Ordway) win. They cut her out of the hotel deal on August 21, but Phyllis will continue to plot. She’s obsessed with the Grand Phoenix, so she’s not giving up on her dreams.

Phyllis won’t want Victor Newman (Eric Braeden) to emerge victorious either, so she’ll turn to a familiar ally – the only person she can relate to and team up with. Of course, we’re talking about Adam. They can’t trust each other, but they can still unite for a common goal. Adam will help Phyllis out with a scheme that should catch Chelsea off guard soon enough.

As for Billy Abbott (Jason Thompson), he’ll feel like his life is spiraling out of control. The Young and the Restless spoilers say there’s a good reason to that. Billy has dissociative identity disorder, which explains this gaslighting scenario. He’s doing it to himself through his alternate personality, so big trouble’s brewing.

After Billy sneaks in the penthouse and steals a handkerchief belonging to Adam’s mother, Hope Wilson (Beth Toussaint), he’ll have no recollection of this event. Nevertheless, holding the handkerchief will eventually bring his alter back. Billy will decide to take his vengeance at last, which will set up a stunning faceoff and an equally stunning interruption. Someone surprising will try to shut down Billy’s murder mission.

Will that someone be Chloe Mitchell (Elizabeth Hendrickson), who already warned Billy not to go after Adam? It’d be nice for Chloe to save Adam’s life for once! She could make up for plotting to kill Adam several times and save Billy from doing something he’d regret.

Later, Chelsea will get a shock of her own, which will likely involve coming face to face with Chloe. Elsewhere, Summer Newman (Hunter King) will find herself in a risky situation. Grandpa Victor will ride to the rescue, so let’s hope he can help Summer out of her jam.

Other Y&R spoilers say Devon Hamilton (Bryton James) will face a bombshell regarding Katherine Chancellor’s (Jeanne Cooper) will. Could Devon’s inheritance suddenly be in jeopardy? Whatever the case, there’ll be something that throws Devon for a loop.