The Young and the Restless Spoilers: Week of August 26 Preview – Devon’s Fortune in Jeopardy – Michael’s Arrest Plan for Chloe & Kevin 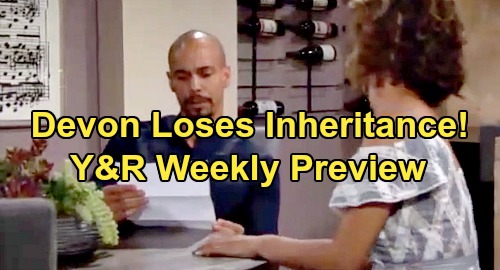 The Young and the Restless (Y&R) spoilers preview for the week of August 26-30 tease that a tense Newman family meeting is coming up. Of course, it’s doubtful Adam Newman (Mark Grossman) will actually be invited, but he’ll arrive to shake things up anyway. In Victor Newman’s (Eric Braeden) office, Adam will once again bring up his plot to destroy the Newman clan.

Victor will be on hand along with Nikki Newman (Melody Thomas Scott), Nick Newman (Joshua Morrow), Abby Newman (Melissa Ordway) and Victoria Newman (Amelia Heinle). Adam will be glad the gang’s all there so he can make his agenda perfectly clear. He’ll insist he doesn’t want to just to take on one or two of them. Adam will think it’d be far more gratifying to take on the myth of the Newmans once and for all!

The Young and the Restless spoilers say Adam will face some dirty looks and enraged comments. The rest of the Newman brood won’t appreciate Adam’s threat, but he’ll be pleased to rile them up. Since Nick will be awarded full custody of Christian Newman (Alex Wilson) this week, that’s only going to fuel Adam’s vengeful mission. It sounds like the Newmans really should watch out!

However, Michael has shifted strategies now that he’s the new DA. He calls for Chloe’s arrest on August 23, which infuriates Kevin so much that he punches Michael in the face. Next week, The Young and the Restless spoilers say Kevin and Chloe will both be handcuffed in the interrogation room. Some heated conflict is coming up.

Y&R’s latest preview video shows Kevin snarling, “You bastard!” Michael replies that he loves his little brother, too. Kevin fires back that if that were true, Michael wouldn’t have arrested his wife. Naturally, Kevin just isn’t seeing the big picture here. Michael wouldn’t have done with without a grander plan – perhaps one that involves getting both Chloe and Kevin off the hook.

Other Young and the Restless spoilers say Devon Hamilton (Bryton James) will receive a surprising letter. It’ll be from an attorney, so Devon will open it up and do some reading ASAP. Elena Dawson (Brytni Sarpy) will be there as Devon explains what’s going on. It turns out some discrepancies have come to light regarding the will of Devon’s late grandmother, Katherine Chancellor (Jeanne Cooper).

Uh-oh. Is this billionaire about to take a financial hit? At the very least, Devon’s inheritance could be tied up while everything gets sorted out. He’s used to having plenty of money to throw around, so a major life adjustment could be headed his way.