BY hellodrdavis on November 30, 2019 | Comments: one comment
Related : Soap Opera, Spoiler, Television, The Young and the Restless 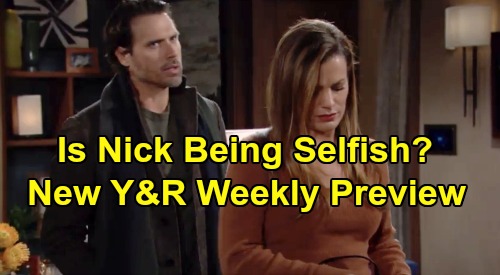 The Young and the Restless (Y&R) spoilers preview video teases that the drama is really heating up. The new Y&R promo for the week of December 2 to December 6 promises some major action, and we’ve got the scoop right here. First off, viewers can expect more discord between Nick Newman (Joshua Morrow) and Chelsea Lawson (Melissa Claire Egan). As Y&R viewers know, these two had a tense Thanksgiving, since Chelsea has been spending so much time with Connor Newman (Judah Mackey) at Adam Newman’s (Mark Grossman) penthouse.

As it turns out, in order to be there for her son 24/7, it also means that Chelsea has to be with Adam 24/7, and that’s really putting a strain on her relationship with Nick. Nick believes that Adam is using Connor’s situation to his advantage, and he’s not happy with Chelsea’s decision to be at Adam’s all the time…yet he still says that he thinks Chelsea should put Connor first. It’s awfully frustrating for Chelsea, who is determined to do right by her son no matter what.

Well, the new Y&R preview promo video shows Nick and Chelsea arguing about the whole situation, with Chelsea telling Nick, “He needs me,” and Nick responding, “Connor or Adam?” It certainly doesn’t look like these two are going to see eye-to-eye on how Chelsea is deciding to handle the situation with her son, which doesn’t bode well for their relationship. Plus, since Y&R spoilers say that Chelsea will move into Adam’s place indefinitely, things will get even more difficult.

Next, the new Y&R promo addresses a situation involving Amanda Sinclair (Mishael Morgan) and Billy Abbott (Jason Thompson). Billy will wind up in a dive bar as he tries to contemplate what to do with his life, and he’ll encounter Amanda there as well. Amanda seems to frequent this bar to spend some time alone and listen to music. But this time, it looks like Amanda will get into some trouble with a guy who hits on her in the bar.

The guy will get in Amanda’s face and come on too strong, probably having had too much to drink. That will prompt Billy to intervene. Amanda is shown in the promo telling the guy to leave and go outside to get some air, and he’ll backtalk a bit, forcing Billy to say that they’ll soon stop being polite. Later, Billy and Amanda will go their separate ways, but a snowstorm will soon force them back together.

According to Y&R spoilers, Billy and Amanda will end up spending the night together in the storm, but it looks like this will be by necessity and not necessarily a romantic situation. Across town, Victoria Newman (Amelia Heinle) will chat with Rey Rosales (Jordi Vilasuso) at Newman Enterprises about the storm. It’s unclear exactly what will bring Rey to Newman, but he’ll have a dire warning for Victoria about the storm.

Victoria will ask Rey how bad it is out there, and Rey will say that it’s pretty nasty and that the wind has already knocked town some trees and that they’re expecting it to get worse. Just then, the power will go out, and it looks like Victoria and Rey could be stuck together as well. Could Rey and Victoria end up spending the evening together as well?

It looks like we’re in for an exciting week, so stay tuned! We’ll give you updates as Y&R news comes in. Stick with the CBS soap and don’t forget to check CDL often for the latest Young and the Restless spoilers, updates, and news.