The Young and the Restless Spoilers: Week of December 2 Preview – Nick Furious With Chelsea’s Deal with the Devil – ‘Chadam’ Love Blooms

BY Heather Hughes on November 29, 2019 | Comments: one comment
Related : Soap Opera, Spoiler, Television, The Young and the Restless 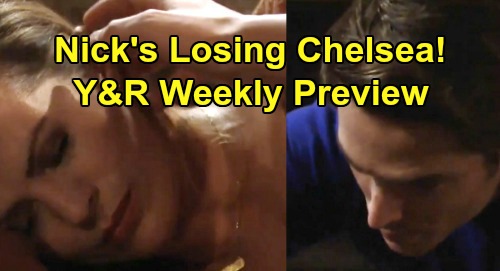 The Young and the Restless (Y&R) spoilers preview for the week of December 2-6 tease that Nick Newman (Joshua Morrow) will be stunned by Chelsea Newman’s (Melissa Claire Egan) decision. Y&R’s weekly preview video points to major “Chick” drama, so this couple could be on the verge of destruction. The latest round of conflict will start when Chelsea reveals Adam Newman (Mark Grossman) pushed her to move in.

Nick will be appalled that Chelsea would even consider it. He’ll remind Chelsea of what Adam’s capable of, but Chelsea will think Connor Newman (Judah Mackey) has to come first. Chelsea will assure Nick that this has nothing to do with Adam and everything to do with supporting her son. She’ll contend that Connor needs both his parents right now, so this move will help him feel secure and loved.

Nick will get why Connor’s got issues after everything he’s been through, but he’ll also suggest that the kid wants his parents back together. Adam will be fueling that in Nick’s eyes, but Chelsea won’t care about Nick’s concerns or anyone else’s. The Young and the Restless’ weekly promo shows Chelsea saying, “I’ll make a deal with the devil if it means my son feels safe.”

Implying Adam is the devil might be a bit of a stretch! Even if Adam is manipulating Chelsea as Nick suggests, he’s obviously a caring and devoted father. Adam has had his fair share of screwups, but anybody can see that he’s committed to helping Connor recover from his trauma.

Nevertheless, Nick will feel like Adam’s using the situation to draw Chelsea closer. That may be true, but perhaps this is just romantic karma. Adam came back from the “dead” and sought a reunion with Chelsea soon after she returned to town. When Chelsea rejected Adam, Nick was more than eager to make his move. He’s happily flaunted his relationship with the love of Adam’s life and tried hijack Adam’s whole family for himself.

Adam is arguably the love of Chelsea’s life as well, so what did Nick really expect? A “Chadam” reunion has always been inevitable. For now, Chelsea will insist that Nick’s the only man in her heart. She’ll make it clear that nothing is going on with Adam, but Nick will remain concerned. He won’t think there’s any line that Adam won’t cross.

The Young and the Restless spoilers say Chelsea and Adam will indeed grow closer while living together, so Nick has every reason to be worried since it appears that “Chadam” love is blooming! We’ll give you updates as other Y&R news comes in. Stay tuned to the CBS soap and don’t forget to check CDL often for the latest Young and the Restless spoilers, updates and news.