BY Heather Hughes on January 11, 2019 | Comments: one comment
Related : Soap Opera, Spoiler, Television, The Young and the Restless 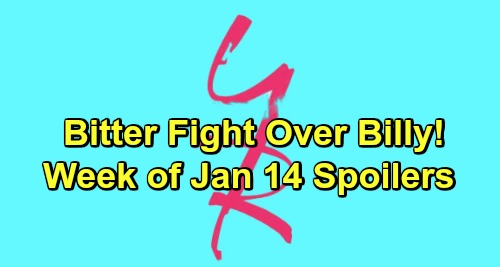 The Young and the Restless (Y&R) spoilers for the week of January 14-18 tease that some crazy moments are ahead in Genoa City. First, Nick Newman (Joshua Morrow) will have to wrap his head around Nikki Newman’s (Melody Thomas Scott) confession. He’ll want the details of the night Nikki killed J.T. Hellstrom (Thad Luckinbill), but she’ll leave two cover-up crew members out of her recap.

Sharon Newman (Sharon Case) and Phyllis Summers (Gina Tognoni) will avoid drama for now, but we’ll see how long that lasts! Nick will definitely want to keep Nikki out of prison, so he’ll establish some trust with Victor Newman (Eric Braeden) to make that happen. However, they’ll clash as they try to decide the best way to handle all this.

Nick may end up taking the fall for Nikki himself, so this J.T. saga is really turning into a mess. Meanwhile, Devon Hamilton (Bryton James) will take a leap of faith and hope it pays off. His efforts could put him closer to learning Ana Hamilton’s (Loren Lott) songwriting secret.

Fenmore “Fen” Baldwin (Zach Tinker) agreed to stay quiet for Ana, but he may not be able to keep that promise. As Devon inches closer to the truth, both Fen and Ana will get stuck in a jam. Fen will also spend some time bonding with Michael Baldwin (Christian LeBlanc) this week. Michael had some doubts about Fen’s music dreams, but he may be more supportive thanks to his son’s new contract.

Other Young and the Restless spoilers say Cane Ashby (Daniel Goddard) will pay Lily Ashby (Christel Khalil) a visit. He’ll just want to reconnect a bit, but things won’t go as planned. A shocker will come out of this meeting, but what will it be? Will Lily decide to cut off all contact? Could the changes she’s faced behind bars make her consider divorce? Anything is possible when Lily’s this distraught.

Over with Phyllis, she’ll push Billy Abbott’s (Jason Thompson) buttons and make Victoria Newman (Amelia Heinle) battle doubts. Phyllis will point out that Billy asked her to reunite before turning to Victoria. That’ll leave Victoria wondering if she was just a simple rebound.

Y&R spoilers say Billy will want vengeance after this startling setback. He really should’ve learned his lesson about revenge by now, but no one ever really learns anything on a soap. Back with Nikki, she’ll deal with another round of danger. Will the cover-up crew’s tormentor return to cause more chaos?

Charlie Ashby (Noah Alexander Gerry) and Mattie Ashby (Lexie Stevenson) will also do some clashing. Their sibling squabble will add to the pressure their family’s under. Finally, Mia Rosales (Noemi Gonzalez) will put the two men in her life to the test. She’ll try to trip Rey Rosales (Jordi Vilasuso) up as well as she how far she can go with Arturo Rosales (Jason Canela).