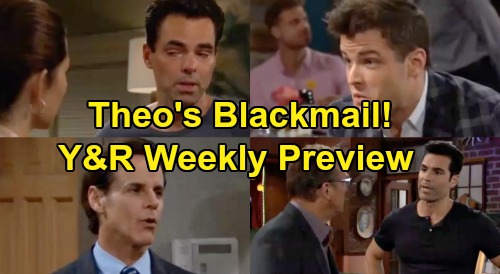 The Young and the Restless (Y&R) spoilers preview for the week of July 29-August 2 tease that some surprises are in store. First, let’s talk about Michael Baldwin (Christian LeBlanc). He’ll undoubtedly clash with Adam Newman (Mark Grossman) about sending Kevin Fisher (Greg Rikaart) off to disappear with his family.

Adam may wonder what makes Michael so sure he doesn’t know where they’re headed. He’s Victor Newman’s (Eric Braeden) son! Adam’s learned from the best and may have had someone keeping tabs. Michael will insist he’s willing to do whatever he has to do here. Keeping Kevin, Chloe Mitchell (Elizabeth Hendrickson) and Bella Fisher (Cali May Kinder) safe is his priority.

As a result, it seems Adam will end up regaining the upper hand. He’ll welcome Michael to the dark side and perhaps bring up the idea of Michael becoming DA again. While Adam and Michael continue to bicker, Billy Abbott (Jason Thompson) will make a confession. He’ll come clean to Victoria Newman (Amelia Heinle) about his vivid dreams and insist he’s haunted by his loss.

Billy can’t shake the feeling that Delia Abbott’s (Sophie Pollono) trying to tell him something. At the same time, Billy feels like he’s going crazy, having a nervous breakdown. He’ll tell Victoria that he’s scared he’s going to lose it. Billy just won’t know what to do, but he’ll have Victoria by his side to help him through it. The Young and the Restless spoilers say Jack Abbott (Peter Bergman) will also get an SOS call, so he may offer support.

Over with Rey Rosales (Jordi Vilasuso), he’ll decide he’s ready to make a comeback at the GCPD. Rey just has to get Paul Williams (Doug Davidson) on board. The Young and the Restless spoilers say Rey will approach Paul at Crimson Lights and make a passionate pitch. He’ll tell Paul how much he misses being a cop and hope Paul will let him rejoin the force.

Finally, Y&R fans can expect more drama between Kyle Abbott (Michael Mealor) and Theo Vanderway (Tyler Johnson). At Society, Theo will be as cocky as ever thanks to the dirt he’s hiding – is essence he’s blackmailing Kyle. Next week’s preview video shows Kyle snarling, “Don’t try to hold what happened over my head.” He’ll shove his finger toward Theo to emphasize his point.

Theo won’t look worried since he has all the power and Kyle has everything to lose. The Young and the Restless spoilers say Theo will seem awfully cavalier about all this. He’ll cross his legs as he suggests what happens in New York, stays in New York – but he clearly won’t mean it. There’s no way Kyle will be able to keep whatever happened under wraps permanently.

It sounds like some exciting episodes are coming up. We’ll give you updates as other Y&R news emerges. Stay tuned to the CBS soap and don’t forget to check CDL often for the latest Young and the Restless spoilers, updates and news.