The Young and the Restless Spoilers: Week of July 29 Preview – Nick Threatens Sharon to Pick a Side, Adam or Everyone Else 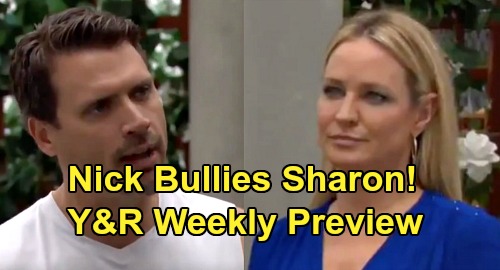 The Young and the Restless (Y&R) spoilers preview for the week of July 29 to August 2 tease that we’ll see some bold moves. First, Phyllis Summers (Michelle Stafford) will do what Victoria Newman (Amelia Heinle) wanted and sell Dark Horse’s assets. Although Phyllis will face plenty of questions from the minions carrying this out, she’ll manage to pull it off under Adam Newman’s (Mark Grossman) nose.

Phyllis will plan to tell Nick Newman (Joshua Morrow) that his properties are being returned to him, but she won’t be done with dirty dealings. She’ll tell Adam that he thinks he knows everything she’s up to, but he has no idea. Will Adam catch on and confront Phyllis about her sneakiness?

The Young and the Restless spoilers say Adam won’t seem very concerned about it, but he’s never really cared about Dark Horse. He just used it as an attempt to make a trade for Christian Newman. However, Phyllis’ comment could mean that she’ll double-cross Nick and Victoria. Then again, Adam could knock Phyllis off the throne, and she could have a final blow for him as a parting gift.

Whatever the case, Phyllis will make Jack Abbott (Peter Bergman) an offer this week. Billy Abbott (Jason Thompson) won’t look happy about it, but Phyllis will wonder if they have a deal or not. Y&R fans know Phyllis only does what’s best for herself, so any other characters should be wary of teaming up with her. A Phyllis partnership benefits someone until it suddenly doesn’t – and Phyllis is sitting pretty!

In the meantime, the Y&R preview promo video shows that Nick will have a stern warning for Sharon Newman (Sharon Case). He’ll run into Sharon in the park and suggest that she’ll have to make a decision. Nick will ask if Sharon’s going to be on Adam’s side or everyone else’s. Honestly, it’s none of Nick’s business if Sharon wants to give Adam a little support. Sharon doesn’t have to answer to Nick and has the right to help a friend if she wants.

Of course, Sharon will pay the price for her bond with Adam. Rey Rosales (Jordi Vilasuso) will refuse to patch things up when Sharon comes to his suite. Sharon will insist she feels pity for Adam instead of love like Rey claims, but Rey just won’t buy that’s all that it is. He’ll argue that Sharon’s using him to hide her feelings for Adam. Rey will shout that he’s not interested in being Sharon’s safety net.