BY Heather Hughes on May 9, 2019 | Comments: 2 comments
Related : Soap Opera, Spoiler, Television, The Young and the Restless 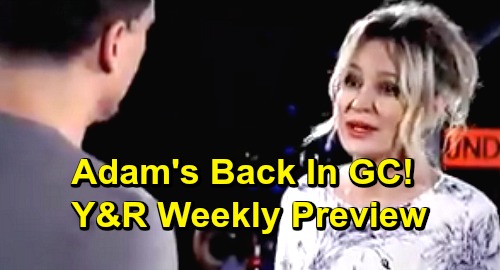 The Young and the Restless (Y&R) spoilers preview for the week of May 13-17 tease that some truth bombs are about to drop in Genoa City. For starters, it appears Mia Rosales (Noemi Gonzalez) and the baby will be OK following a medical crisis. However, Rey Rosales (Jordi Vilasuso) will decide it’s time to get some answers once and for all. He’ll insist that Mia’s getting a paternity test done right then and there.

Arturo Rosales (Jason Canela) will also be on hand to find out if he’s going to be a father. The Rosales brothers will anxiously await the results along with Y&R viewers. Meanwhile, Phyllis Summers (Gina Tognoni) will try every trick in the book to make herself a success story. She’s exhausting all options as she works to reclaim her life in some way.

Unfortunately, Phyllis tends to bend the rules – or completely shatter them in some cases. The Young and the Restless spoilers state that Michael Baldwin (Christian LeBlanc) will offer Phyllis a warning. He’ll note that it’s his duty to inform her that there are laws against peddling counterfeit goods. Michael will push Phyllis to find a better option, but we’ll see if she listens!

Other Young and the Restless spoilers say Kyle Abbott (Michael Mealor) will decide he’s had enough of Summer Abbott’s (Hunter King) mischief. He’ll see right through her strategies to tear his relationship with Lola Rosales (Sasha Calle) apart. Kyle will assure Summer that he knows what she’s up to, and it’s not going to work. He’ll think Summer should just wave the white flag already, but she obviously won’t.

Whether Summer achieves victory or just revenge, this isn’t over until she says it is. At Nick Newman’s (Joshua Morrow) place, Sharon Newman (Sharon Case) will deliver some shocking news. Sharon will admit she was getting on the jet with Victor Newman (Eric Braeden) earlier when Adam Newman (Mark Grossman) called. She’ll point out that Adam agreed to come back to Genoa City with them…ADAM’S HOME!

Nick will look stunned as he processes what this might mean for his family. Christian Newman (Jude and Ozzy McGuigen) is Adam’s biological son, so you can bet a custody battle is brewing. We’ll give you updates as other Y&R details emerge. Stay tuned to the CBS soap and don’t forget to check CDL often for the latest Young and the Restless spoilers, updates, and news.

📺PREVIEW FOR NEXT WEEK 📺 #YR pic.twitter.com/1CI2cyELSb