BY Heather Hughes on October 17, 2019 | Comments: one comment
Related : Soap Opera, Spoiler, Television, The Young and the Restless 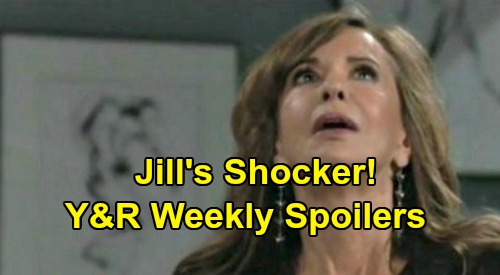 The Young and the Restless (Y&R) spoilers for the week of October 21-25 tease that some bombshells are brewing. First, Devon Hamilton (Bryton James) will decide he’s had about enough of Amanda Sinclair (Mishael Morgan). His patience will finally run out, so Devon will explode in a big way.

As for Jill Abbott (Jess Walton), she’ll deliver some troubling news. If Jill still hasn’t heard from Cane Ashby (Daniel Goddard) by then, her news may be that he’s missing. Then again, Cane could also get in touch with some will answers. In that case, Jill could pass along some disturbing updates.

In the meantime, Nick Newman (Joshua Morrow) will catch a flight to Las Vegas with a goal in mind. He’ll be determined to find Adam Newman (Mark Grossman) for Connor Newman’s (Judah Mackey) sake. That’ll leave Chelsea Newman (Melissa Claire Egan) to tackle Victor Newman’s (Eric Braeden) questions. Since Chelsea pushed Adam away early on, Victor will question her change of heart. He’ll grill Chelsea about her motives, so Chelsea will be forced to defend herself.

Back with Nick, he’ll push his luck with someone. Riza Thompson has undoubtedly had enough of Genoa City residents pumping her for information. Nevertheless, she might be Nick’s best shot at locating Adam. Nick might pay Riza another visit and insist he’ll make it worth her while if she helps him out.

Other Y&R spoilers say Sharon Newman (Sharon Case) and Rey Rosales (Jordi Vilasuso) will focus on a new beginning. Sharon was hesitant to sign on for a second date because it’s not really just a second date. They’ve been down this road before and it didn’t end well. However, Rey made a solid pitch about trying again. He wore Sharon down, so she’ll be more open to a fresh start together.

Over with Summer Newman (Hunter King), she’ll have a hard time fighting her feelings. The Young and the Restless spoilers say Summer will grow even closer to Kyle Abbott (Michael Mealor), so it’ll become tougher to keep boundaries in place. Next, Victoria Newman (Amelia Heinle) will have some concerns. She’ll fear Billy Abbott (Jason Thompson) is drifting back toward the dark side, and she won’t like it.

Perhaps Billy’s Jabot power trip will lead to some cutthroat moves. Victoria may also worry about Billy’s reaction to Adam’s homecoming. Nick might fill Victoria in before he goes and leave her fretting about what’s ahead for Billy. Victoria should know that if Nick succeeds in his mission, it’ll be hard on her almost husband.

Finally, Lily Winters (Christel Khalil) will head back to GC and confront Amanda. The Young and the Restless spoilers say Lily and Amanda will have a fierce faceoff, so that’s something to look forward to. We’ll keep you posted as other Y&R details emerge. Stay tuned to the CBS soap and don’t forget to check CDL often for the latest Young and the Restless spoilers, updates and news.