The Young and the Restless Spoilers: Week of October 28 – Chelsea’s Past Haunts – Adam and Billy Showdown – Abbott Family Visitor 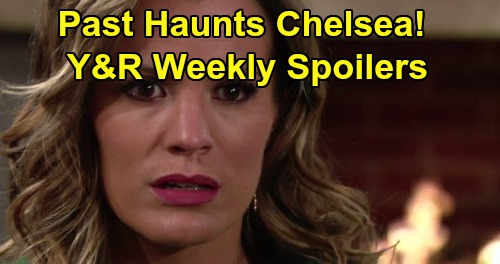 The Young and the Restless (Y&R) spoilers for the week of October 28-November 1 tease that some surprises are in store. For starters, Chelsea Newman (Melissa Claire Egan) will have to make a tough call. This could involve Connor Newman (Judah Mackey), who’s currently living with Adam Newman (Mark Grossman).

It was difficult for Chelsea to leave Connor at the penthouse, but she views the arrangement as temporary. Even so, this could add to the drama with Nick Newman (Joshua Morrow). Chelsea will be forced into another tricky situation, so we’ll see how she handles it. Whatever Chelsea decides will undoubtedly be in Connor’s best interest – at least from her perspective.

Unfortunately, Chelsea has more chaos headed her way later. The Young and the Restless spoilers say the mysterious Simon Black (Jeffrey Vincent Parise) will make his debut. It looks like Simon will head straight for Chelsea, so her back could be against the wall soon enough. Simon will probably demand cash, which Chelsea just so happens to have a lot of thanks to Calvin Boudreau (John Burke).

Of course, it’ll raise red flags if Chelsea drains the account with the laundered money. She certainly doesn’t want to tip off the authorities. However, Chelsea will cross that bridge when she comes to it. The week ahead should mostly focus on the initial shock of Simon’s arrival.

Meanwhile, an old friend of the Abbotts will pop in. Doris Tillington (Mary-Margaret Lewis) will show up to discuss some Abbott family history with Traci Abbott (Beth Maitland). Jack Abbott (Peter Bergman) will likely join in and hear some old stories. Let’s hope Doris can bring Jack and Traci a step closer to solving Dina Mergeron’s (Marla Adams) mystery.

Other Young and the Restless spoilers say Adam will face off with Billy Abbott (Jason Thompson). Billy may think he’s got his vengeful desires under control, but seeing Adam again will be the true test. That’s especially true since they’ll be pushing each other’s buttons. Y&R fans will see some fierce threats hurled, so stay tuned for some tense scenes.

As for Nick, he’ll finally cave in on this run for councilman. Tammy Diamond (Gillian White) pushed Nick to go after the vacant spot, and she’ll rev up the pressure in the week ahead. The Young and the Restless spoilers say Nick may ultimately feel he has no choice. A campaign will indeed be heating up for November sweeps, so that’ll raise the stakes for sneaky Chelsea.

Over with Sharon Newman (Sharon Case) and Rey Rosales (Jordi Vilasuso), passion will erupt. They won’t want to move too fast, but it’ll be hard when so many sparks are flying. We should also mention the alternate reality Halloween special that’s coming up. It’ll allow us to see some fantasy versions of GC, including a side of Rey that’s a bit more dangerous.

Nick will also see what an Adam-less world would look like while Abby Newman (Melissa Ordway) faces unwelcome attention. Phyllis Summers’ (Michelle Stafford) power trip dream will turn into a full-blown nightmare, so it won’t be a happy Halloween for her either. Over with Kyle Abbott (Michael Mealor), a time warp will throw him for a loop. He’ll be rattled over the changes in this wild fantasy life.