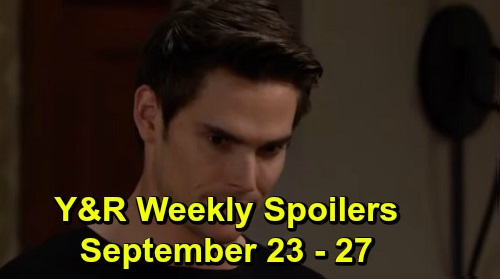 The Young and the Restless (Y&R) spoilers for the week of September 23-27 tease that some shockers are looming in Genoa City. For starters, Nikki Newman (Melody Thomas Scott) will be rocked to the core – most likely thanks to Adam Newman’s (Mark Grossman) sneaky plan. Despite his guilt in swapping Victor Newman’s (Eric Braeden) pills, Adam will have no intention of going down for his dad’s murder.

Instead, Adam will set Victoria Newman (Amelia Heinle) to take the fall. The Young and the Restless spoilers say Nick Newman (Joshua Morrow) and Chelsea Newman (Melissa Claire Egan) will reel over the news. Naturally, Nick will know Adam’s framing his sister. He’ll inevitably fly off the handle and insist Adam must pay for his crimes.

Victoria will be a mess as all the evidence points straight at her. Michael Baldwin (Christian LeBlanc) may have his doubts about Victoria’s guilt, but what can he do? It looks like he’ll have to bring some harsh charges anyway. Y&R fans can expect Michael to drop a bomb on Lauren Baldwin (Tracey E. Bregman). That may involve the murder accusations against Victoria and the flimsy motive behind them.

Adam will set up the story of power-hungry Victoria wanting controlling Victor out of the way. He’ll make it look like this was all about the future of Newman Enterprises. The reasoning behind this crime is sure to raise red flags with pretty much anyone who knows Victoria. She’s ambitious, but she wouldn’t kill her father because of the company.

As for Sharon Newman (Sharon Case), she’ll rush to Adam’s defense. He obviously won’t have anyone in his corner, so Sharon will gladly defend him and make it clear that Adam’s innocent. The Young and the Restless spoilers say Sharon will be in for a rude awakening down the road!

For now, Sharon will get the fresh start she’s craving. Could that be with Adam? He’ll make a daring move by midweek, so that could involve revisiting his proposal. Whatever the case, Sharon will be his ride-or-die girl – at least until the horrifying pill swap and framing truth comes out.

Back with Nikki, she’ll spill her big secret so someone. That probably means the fact that Victor isn’t really dead, but who will she tell? It’ll be interesting to see how Nikki handles this tricky situation. Next, Jill Abbott (Jess Walton) will fret over Billy Abbott (Jason Thompson). After Jill gets updates on some of Billy’s struggles, he’ll assure her he’s climbing out of the dark hole he’s been in.

Billy will promise he’s getting the help he needs, but Jill will remain concerned. On a lighter note, Jack Abbott (Peter Bergman) will seek Traci Abbott’s (Beth Maitland) help. She’s a great writer and Jack’s got a great story to tell – the story of his life. Jack will wonder if his sister would like to team up on this, so she’ll undoubtedly get on board.