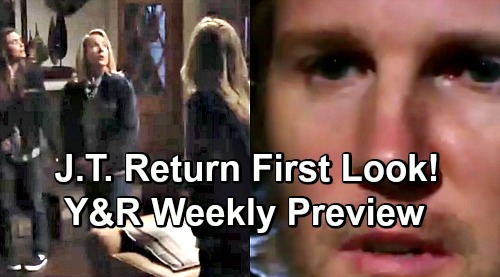 The Young and the Restless (Y&R) spoilers for the week of March 18-22 tease that some shocking episodes are on the way. Y&R’s weekly promo offers fans their first glimpse of J.T. Hellstrom’s (Thad Luckinbill) return from the “dead.” The plan may or may not have always been to have J.T. return, but the CBS soap’s new head writer, Josh Griffith, is the one who reached out to Luckinbill.

Once Luckinbill heard the details, he decided he was in and this storyline’s conclusion was set in motion. This hot plot’s about to get even hotter! The Young and the Restless spoilers say Nick Newman (Joshua Morrow) and Billy Abbott (Jason Thompson) will seek Rey Rosales (Jordi Vilasuso) help. Thanks to Katie Abbott (Sienna Mercuri), they’ll know the ranch spy sang a song that was written by J.T.

Of course, this is just the final piece of evidence. The tormentor has always known things only J.T. could know and done things only J.T. could do. Once Billy and Nick explain everything to Rey, they’ll insist that J.T. is still alive. They’ll be determined to prove it, but the plan will require helping the convicted cover-up crew escape.

Rey will pull some strings and make it happen, so it won’t be long until Nikki Newman (Melody Thomas Scott), Sharon Newman (Sharon Case) and Victoria Newman (Amelia Heinle) are hidden at the Abbott cabin. After their prison transport van getaway, they’ll get updates and wait for the guys to prove they didn’t murder J.T. Y&R spoilers say a trap will be set, but it’ll quickly head downhill.

Billy and Nick will deliver the news to a fearful Victor Newman (Eric Braeden) this week. He’ll have a good reason to be concerned since Nick and Billy will use the cover-up crew as bait. Through the listening device they find in Victoria’s home, they’ll intentionally give J.T. a bogus tip. They’ll want J.T. to head straight for the Dark Horse warehouse so they can capture him.

However, The Young and the Restless spoilers say that isn’t where J.T. will end up. Outside the Abbott cabin, an armed intruder will smash a cell phone. The lights will flicker inside as Victoria, Nikki and Sharon panic. They’ll panic even more when J.T. appears and approaches them. This is the big showdown everyone’s been waiting for, so Y&R fans will want to tune in.

The girls’ night gang will fight back, which means they’ll turn the tables and force J.T. into a dangerous situation of his own. We’ll keep you posted as other Y&R details emerge. Stick with the CBS soap and don’t forget to check CDL often for the latest Young and the Restless spoilers, updates, and news.