The Young and the Restless Spoilers: Who Is Simon Black – New Character’s Unfinished Business Shakes Up GC 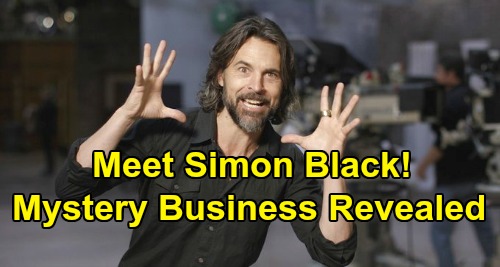 The Young and the Restless spoilers tease that we’ll soon see a new face in Genoa City right in time for Fall Sweeps. First appearing on Friday, November 1, veteran actor Jeffrey Vincent Parise will be joining the CBS soap in the new role of Simon Black. Simon is described by Y&R as “a charming and mysterious stranger who visits town to settle unfinished business with someone in Genoa City.”

You might recognize Jeffrey Vincent Parise from his stint at villain Carlos Rivera on General Hospital. But what sort of “charming and mysterious” character will he be on Y&R? We can think of a couple of possibilities for where his character Simon Black could fit in to the Genoa City scene,

First off, he could be an associate of Amanda Sinclair’s (Mishael Morgan). Amanda, who recently came to town to inform Devon Hamilton (Bryton James) that Katherine Chancellor’s (Jeanne Cooper) will was being contested, has been shown on the phone with a mystery person on more than one occasion, which could be Chance Chancellor (John Driscoll) or someone else.

Could Simon Black have unfinished business with Amanda? If they’re in cahoots together (with or without Chance) to bilk Devon out of his fortune, then he’d probably be showing his face soon. Perhaps Simon is someone who Devon went up against in business who has a score to settle, and he’s behind the challenge to Katherine’s will as a way of messing with Devon.

Another possibility is that Simon will wind up being a Las Vegas associate of Adam Newman’s (Mark Grossman), from back when Adam had amnesia and was on the Las Vegas scene as “Spider” the poker player. Adam apparently won a lot of money from his competitors in Las Vegas, and Simon could one of those folks who has a score to settle with him.

If that’s the case, then we could see Phyllis Summers (Michelle Stafford) and Cane Ashby (Daniel Goddard) get caught up with Simon in Las Vegas. They’ve both just headed to Vegas to track down Adam, and if they’re there for a while, then they could encounter Simon or do something while they’re there to attract his attention and cause some need for him to visit Genoa City down the line.

It will be interesting to see who Simon ends up interacting with on screen. His stint on Y&R will reportedly be short-lived, but he’ll certainly bring some intrigue for someone currently on canvas. Who do you think it will be? Stay tuned to the CBS soap and don’t forget to check CDL often for the latest Young and the Restless spoilers, updates, and news.