The Young and the Restless Spoilers: Y&R Meets Bold and the Beautiful on Let’s Make A Deal – Two Exciting Guest Appearances 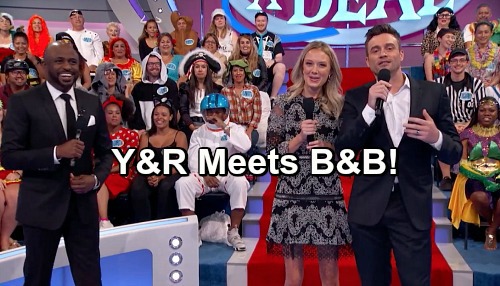 The Young and the Restless spoilers has some exciting news to pass on about two Y&R stars who will be temporarily joining another hit CBS show. On Friday, January 18, Melissa Ordway and Daniel Goddard will make a guest appearance on Let’s Make A Deal.

Of course, Melissa Ordway portrays Abby Newman, and Daniel Goddard portrays Cane Ashby on Y&R. The two rarely share scenes together, so it will be fun to watch them join forces to appear on Let’s Make A Deal.

Melissa recently announced the upcoming appearance on her Instagram account. She shared a photo of herself, Daniel, and Let’s Make A Deal host Wayne Brady on set, along with the following message: “This was so much fun! Such an honor to play on the @letsmakeadealcbs set and meet the talented @mrbradybaby. Watch @thedanielgoddard and me tomorrow!! #yr”

The appearance should be exciting for the Let’s Make A Deal studio audience, and for at-home viewers. Melissa’s Instagram followers are certainly excited about the upcoming appearance. Many fans have responded that they’ll definitely be watching and can’t wait to see their Y&R faves in action on a game show.

And let’s not forget that Wayne Brady, the host of Let’s Make A Deal, has recently become a soap star in his own right. He’s currently portraying Dr. Reese Buckingham on B&B. So viewers will get to see three soap stars together in the same place.

In a way, it will be like Y&R meets B&B…but on a game show! No word on exactly what Melissa and Daniel’s roles will be on the show. We’ll have to tune in to see!

Are you looking forward to seeing Melissa and Daniel’s appearance on Let’s Make A Deal? Stay tuned to the CBS soap and don’t forget to check CDL often for the latest Young and the Restless spoilers, updates, and news.