The Young and the Restless Spoilers: Y&R Shifts Gears on Creepy Theo – Do You Buy the New-and-Improved Version? 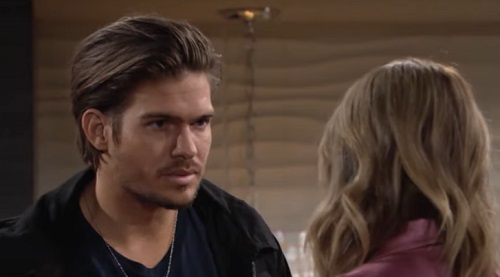 The Young and the Restless (Y&R) spoilers tease that some big changes have been underway for one sleazy character. From the moment Theo Vanderway (Tyler Johnson) debuted, he was pretty much a total slimeball. Theo had no layers whatsoever and seemingly existed only to cause problems. He was becoming insufferable, so Y&R finally shifted their strategy.

Complex characters are the key to creating good drama. Take Adam Newman (Mark Grossman) for example. He’s done horrible things, but anyone can see that he adores Connor Newman (Judah Mackey). Adam may not love Sharon Newman (Sharon Case) or Chelsea Newman (Melissa Claire Egan) how they need to be loved, but he’s shown some depth there, too. He has a soul, even if it’s a tortured one.

Theo, on the other hand, was portrayed as an obnoxious egomaniac with no boundaries. Until recently, Theo had never done anything that wasn’t manipulative and self-serving. He reached an all-time low when he relentlessly hit on Tessa Porter (Cait Faitbanks) despite her declaration that she was gay and not interested. Theo was treating Tessa like she was a conquest, and it was downright disgusting.

What kind of creep makes a play for his boss’ girlfriend while plotting to steal her job and blow up her close friends’ marriage? Theo was becoming a nasty nightmare of a character, so something had to give. Suddenly, a switch flipped. Theo revealed his father died when he was 15, and he genuinely wanted to help Summer Newman (Hunter King) through her grief.

Then, Y&R took the comic relief angle by making Theo pass out at the sight of blood. He also seemed truly committed to making amends with Kyle Abbott (Michael Mealor) when he sought Lola Abbott’s (Sasha Calle) help. By having Theo win Lola over a bit, they may have been trying to win viewers over as well.

Later, Mariah Copeland (Camryn Grimes) put Theo in his place about Tessa. She wouldn’t let him get away with his claims about just being a flirt. The Young and the Restless acknowledged that Theo’s behavior was wrong and tried to pivot away from it. They seem to be scrapping some stories and tweaking things along the way.

They even leaned into Theo’s tendency to use the bedroom as the answer for everything. Summer called Theo out on that, and he had a chance to explain he was trying to provide a distraction. For once, Y&R showed that Theo’s heart was in the right place. He ultimately just held Summer close, so it was stark contrast to the Theo we’d seen previously.

Theo was making an effort – just as the show’s apparently doing by trying to salvage the character. Of course, we have to wonder if it’s too little, too late. Theo’s been slimy for so long that some fans may struggle to shake that image of him.

There’s also a possibility the show’s choosing to be less heavy-handed with Theo’s scheming side. It was on full display before, but could it just be somewhat hidden now? They’re definitely going for a more complex character, but that doesn’t mean they’re going to make him a saint. Theo’s arguably a troublemaker at his core, so there’s no guarantee he won’t stab people in the back.

It’ll be interesting to see if Theo has staying power in GC. Do you buy this supposedly new-and-improved Theo? Are the changes paying off or do you still think Theo’s a creep?