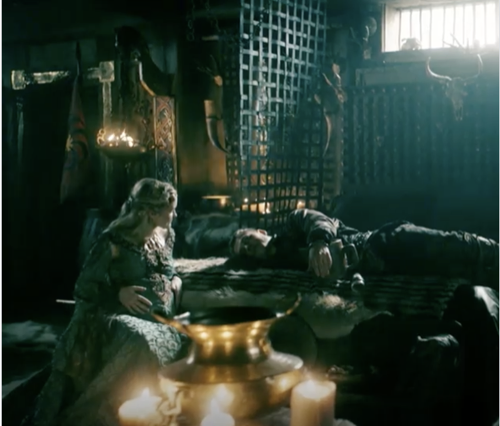 Tonight on the History Channel Vikings returns with an all-new Wednesday, January 16, 2019, season 5 episode 18 called “Baldur,” and we have your weekly Viking recap below. On tonight’s Viking season 5 episode 17 episode as per the History synopsis, “Hvitserk is severely tested; Floki makes an amazing discovery; Freydis gives Ivar a surprise; Ubbe negotiates with the three Danish kings who have massed their armies in Reading, but the negotiations may have a perilous outcome.”

Vikings begins tonight with the Viking settlement celebrating in the great hall when Hvitserk (Marco Ilso) walks in, revealing he is the son of Ragnar Lothbrok (Travis Fimmel). He is looking for the hospitality of an ally. He is told he can go meet King but he first must remove his clothes.

Bjorn (Alexander Ludwig) and Gunnhild (Ragga Ragnars) marry while King Harald (Peter Franzen) watches from his throne, remembering his nights with her. Harald congratulates her but questions her about wanting to be the Queen of Norway; she bites back saying she never said who she wanted to be King. Magnus (Dean Ridge) hugs Harald, thrilled that he is at the wedding of his brother, and he has King Harald to thank for that.

Harald congratulates Bjorn, even though he knew Harald wanted her. Bjorn says Harald always wanted to be Ragnar and didn’t understand why people followed Ragnar and not him. Bjorn says he will never be king of Norway simply because it isn’t the gift of the gods. Harald is happy for him today and envies him; Bjorn believes that won’t stop them from working together as Harald agrees there are greater things at stake than just a woman. Bjorn remind him that Gunnhild is not just a woman!

Hvitserk is brought naked to see the king, who has been expecting him. He tells Olaf to get their guest something to eat. He feels another son of Ragnar coming to see him is respect. Hvitserk believes the king is who they call “Buddha”. He simply laughs in the steam room.

Ivar (Alex Hogh) rides his chariot to the middle of the Kattegat and sees how the statue has been split in half. Everyone is ordered back as the men take Thora (Eve Connolly) to Ivar, who insists he is trying to rule well for the benefit of their people. He wants to know why she hates him. She says in Ragnar’s time, everyone was free and do what they wanted; above all, he never forced people to worship him as he knew he was only human like the rest of us. Ivar says she has spoken well and tells her to go. He remembers his father as a good man and one of them.

The King is excited to travel to England along with his brother, wanting to know what kind of ruler Ivar is. Thora begins to walk out of the great hall, paranoid about the men following her, while she has a massive blood streak down her cheek. She runs out the gate into the forest as Hivitserk reveals Ivar has declared himself to be a god and no longer the brother he knew. Thora comes upon the scene of her father’s place burning and they cry out to each other as she is captured too. Hvitserk admits he has come for them to attack Ivar and become the king of Kattegat, but he chooses to go with his original plan. Thora is forced to watch her entire family burn, just before they light her on fire as well. Hvitserk is also taken captive as Ivar watches the fire burn in front of him knowing he sent his brother to his death.

Floki (Gustaf Skarsgard) buries the bodies in Iceland. He confronts Kjetill Flatnose (Adam Copeland) about not digging his own daughter’s grave, but Flatnose feels she become more of Floki’s daughter than his own. Flatnose tells Floki that he is the same as the rest of them, but Floki refuses to kill him or hit him with the spade.

He says had he been the old Floki he would have put the spade in him just enough to incapacitate him then force him to watch as he burned his wife alive and then he would force his one remaining son to chop off his balls and make him eat them; then the last thing he would see as he bled out was Floki raping his son, never knowing if he would show him any mercy. Floki smiles, saying he won’t do any of that, even though he and Eyvind don’t believe it, he will change himself and intends to stay this way. Floki tells him that he can do with this place as he likes as he is done with humans!

Judith (Jennie Jacques) goes to see a witch doctor, of sorts but ignores pleads to leave when she discovers a “Crazy woman” cowering in the corner, it turns out to be Lagertha (Katheryn Winnick). Judith has her brought back to the castle, while she lives her own hell in her head. She looks down, envisioning the snakes that were placed in the pit that killed Ragnar. She cries as she witnesses Ragnar’s last words, she makes eye contact as he falls. She is now in the cage, as she hears him tell her, “I will always be with you and she has given him her heart.” She cries out for Ragnar as life becomes more clear. She learns from Judith that she is in Wessex, only saying Ecbert’s name.