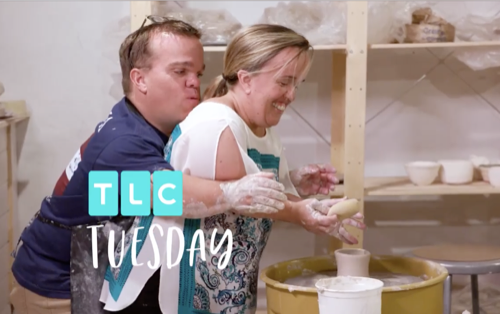 Tonight on TLC America’s largest know little family, 7 Little Johnstons returns with an all-new Tuesday, April 14, 2020, episode and we have your 7 Little Johnsons recap below. On tonight’s 7 Little Johnsons Season 5 Episode 3 “We Came From Uranus,” as per the TLC synopsis, “The Johnstons pursue their family history with the help of a genealogist and get some unexpected results. Jonah deals with the fallout from being kicked out of college, while Trent and Amber turn to a professional for help.”

So make sure to bookmark this spot and come back from 10 PM – 11 PM ET! for our 7 Little Johnsons recap. While you wait for the recap make sure to check out all our television recaps, spoilers, news & more, right here!

Now that it is summer and the kids are out of school, there is more time to do fun things. Amber has a genealogist, Tammy, drop by the house to trace their family history. Trent tells Tammy that his family came from Emerald city, lol. The plan is that they are going to get their family trees done. The kids are going to do an online where they take a DNA sample.

Next, Tammy has the whole family do a pottery class together. John is the pottery instructor, he wants to teach them how to do a pot in one session, this is not an easy thing to do. Amber says it is a lot harder than it looks. John thinks anyone can learn, it is about the dedication. Anna hates touching the clay because it gets everywhere. She kept getting the perfect bowl and then messing it up at the end. Trent gets all romantic with Amber, he has these “ghost” feelings and hears the Righteous brothers singing. Amber tells him that his arms are too short, they can do Lady and the Tramp. Alex made a really nice bowl. Amber’s looked more like a heart. Trent’s was short, thick and heavy-duty. John tells them usually people take a couple of weeks to accomplish what they did in one class.

Trent is sitting with Jonah regarding the conversation they had with Amber about his being released from the school for failing math. Trent tells him that not everything that has happened over the past few years is because of Anna. Jonah says the school is the only option, he has to finish, he just doesn’t know where to do it. Trent tells him it is not the school, it is the commitment in him. He needs to change his work ethics today, half school and half a part-time job. Amber and Trent think Jonah needs some counseling first. They just hope he does what they recommend.

The kids are doing their tests, they have to fil tubes with saliva, a lot of it. Alex thinks it is really a strange thing to do. Anna thinks she is a really good spitter. Jonah wants to test the dog’s spit and see where he is from. Emma thinks she could be from Africa, it is multiple times a week discussion. And, Alex swears he is Italian because he loves pasta. Amber thanks all the children for participating. Emma makes a joke that she is from Uranus.

Trent tells Amber that he spoke to Jonah about school. He thinks there are underlining issues and he needs to speak to someone about them. Amber agrees and that has to be the first step.

Amber is leaning to registering Jonah in a technical school. She looks at the last year and there was a lot of defeat so they shouldn’t do it a third time. She hopes that therapy will help Jonah to open up and empower him to get a plan, feel a little bit more energized about it.

Jonah meets with Dr. Galen to get his advice on what he should do. Jonah tells him his life story. His mom had complications and he stayed in the hospital for seven months when he was born. Kindergarten to grade eight he had straight A’s. In high school, he had to put in more work. In ninth grade, he got a text message from his mom saying that Anna had spray-painted in the school. Going on through high school Anna had more hiccups. Jonah says he couldn’t be focused academically because he was answering his mom and figuring out things for Anna.

In the end, he blames himself. He says he is really sweating Anna. Dr. Galen asks if Anna is doing better, she is. Jonah says he focused on college, but then, Anna was punished and he had to drive her to school. Dr. Galen asks him what does he want different. He wants Anna’s burdens and consequences not to be on him anymore so he can focus on college. He did an over good job, he has 28 credits. He wants to work towards a degree. Jonah has a great session, he says that it wasn’t solely about Anna that he failed, he puts the blame on himself.

At home, Jonah tells Trent and Amber that his visit went well. They are both happy that he is open to telling them without them asking. He tells them that Dr. Galen told him that he is to get out of a third parent role, and they should understand that. Trent agrees that they have taken advantage of him sometimes, Amber agrees, they have to assume 100% responsibility for Anna.

Time to get the genealogy results. Tammy tells Amber and Trent the bad news is none of their ancestors went through Ellis Island. Trent’s family came over in Jamestown. Tammy was able to go back to 500 years. Amber’s family came over on the Mayflower. Emma is Korean and northern China. Alex is Korean and northern China. Ana is part Russian/Findland/Asian. Elizabeth and Jonah are English. Alex wants to be re-tested, he still thinks he is Italian.