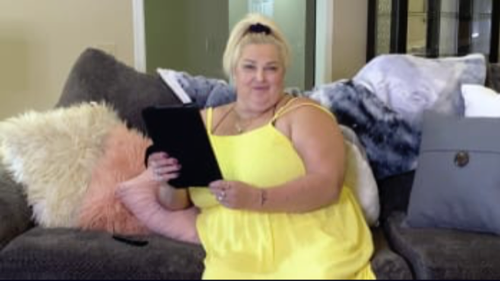 The couples of Happily Ever After are watching some of their best moments. In Tampa, Libby is getting ready to watch the first episode. Andrei and Libby sit with wine and watch as they look at Twitter. They read tweets that tease Andrei about being lazy and staying at home with their daughter. They watch clips from a family party. They are late, something Andrei blames Libby for.

Libby gets irritated watching the clip when Andrei announces their wedding in his home country. She had no idea he had these plans. They watch what happened after when Libby is mad at him on their way home in the car.

They read another Tweet, teasing Andrei for wanting Libby’s father’s money. The other couples think Andrei is acting like a bridezilla. Libby thinks her boobs look great in the clip.

Asuelu and Kalani sit with popcorn to watch the episode. They watch the clip of Asuelu being picked up at work after serving samples of yogurt. He jokes about having diarrhea. The other couples get angry watching the clip of Asuelu when he arrives home and doesn’t help get their crying child out of the car. Some viewers on twitter also tweet their irritation.

Colt and Deb make cheese balls before watching the show. Meanwhile, Jess is also ready to watch the episode. The episode clips roll with Colt working out. Annie and David laugh at Colt working out. Colt and Deb read tweets teasing Colt for his mom being the only one who thinks he looks good. Colt thinks he should date again. His mom says no. Jess agrees, he isn’t ready. They read more tweets teasing Colt for living with his mother.

They watch a scene of Colt getting out of the shower. Deb covers her eyes. Colt lists off Jess’ good qualities in the clip. Looking back, Colt thinks it was all wrong. He does admit he has a thing for Brazilian women. Annie and David tease him as well as the other, joking he looks online for them. His mother laughs.

In Georgia, Angela gets the kids pizza before she settles down to eat and watch the episode. Michael is also watching from his home. The clip rolls, showing Angela dancing. Tim thinks it is “ugh.” Annie dances. Angela reads a tweet about the one egg she has left. Angela laughs, she thought she was great. Next, she watches a fan twerk, copying her. She laughs. The next highlight rolls of her and Michael greeting one another and kissing.

The next highlight features Angela and her daughter who is worried about Michael. Michael reads a tweet about being a gold digger. He explains that he isn’t looking for material things.

Angela calls Michael and tells him she has her period. They watch the old clip and laugh. The other 90-day cast cannot believe she still has her period at 54. Michael jokes she might be able to tote a baby. They watch the old clip of Angela hearing his ring tone and how he silences it fast. She gets mad, assuming he is cheating. She then sits down for a smoke. She reads a tweet, making fun of her for putting cigarettes and more in her bra. She laughs.

Asuelu shows off his fruit tress before joining Kalani to watch more clips. In the clip, Kalani’s dad shows Asuela how to garden. Asuela declares he is the man of the house. The others laugh. Kalani laughs at her dad’s beard and how her dad is lecturing Asuela. They read tweets about how scary and big her dad is. Kalani also notices Asuela is eating an apple while her dad lectures him about stepping up.

Colt and Deb watch as Colt meets Jess at the airport. Colt notices their awkward height difference. Colt reads a tweet that Jess must have beer goggles when they head out to a bar. In the clip, Colt asks her to go back to the hotel to have sex. Victoria and Tim laugh hysterically. Jess reads a tweet that she needed to drink to have sex with Colt. They continue to watch the clip of him and Jess making out and leaving. Deb looks uncomfortable. Annie and David make kissy faces along with the other couples.Jess makes jokes about him acting like a virgin man.