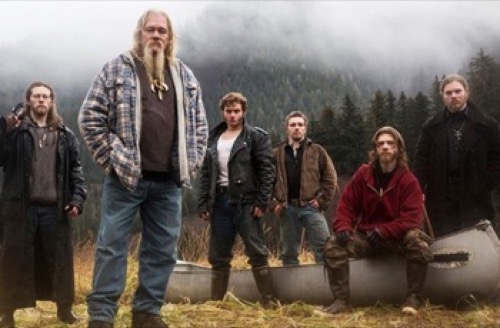 Tonight on Discovery Alaskan Bush People premieres with a new season where the Wolfpack faces the biggest challenge on an all-new Sunday, August 23, 2020 episode and we have your Alaskan Bush People recap below. On tonights Alaskan Bush People Season 12 Episode 1 “Life in the Extreme,” as per the Discovery synopsis, “In the late fall, the Browns kick start their ambitious cabin build; Bam and Gabe go on a deer hunt, and the family scrambles to pull off an extreme wedding on the mountain, but things take an unexpected turn.”

Gabriel and Snowbird are rock racing. Gabriel wins several times. He cheers. Later, the men start clearing the land for the more than 2,000 square foot home they plan to build. Winter is coming soon so they need to get ready to pour the foundation soon.

Months earlier, Bear proposed to Raiven. She said yes. Now they are planning their wedding. They look in the barn. Meanwhile, Bam and Gabriel hunt for the food they will have at Bear’s wedding. They are hoping to shoot a deer. Gabe has shown up unprepared.

Snowbird, Noah, and the others head to get some rebar quick, taking a break from wedding prep. Noah’s equipment isn’t working, making them all worry they won’t be able to barter for the rebar for the foundation. Minutes later he gets it working.

Raiven and Bear grab wood for their wedding. Bam and Gabe continue to hunt. It is hard hunting since everything is brittle and dry, making a lot of noise under their feet. Bam is getting annoyed because he feels like Gabe is being very loud.

Bear practices a song on his guitar he has been working on for the wedding. He is so nervous. He loves Raiven. Billy and Ami talk about Bear marrying. They never thought he would. Hopefully, Raiven understands him.

Noah, Snowbird, and the others are headed back home with their rebar. On the way there they realize they have a flat and have lost some rebar. They don’t know how much. They worry they won’t have enough. They split up and look for rebar. Snowbird finds a piece.

Bam and Gabe are still trying to get a deer. They end up walking upon Rain’s house. Bam is on edge. They really need to get a deer. Meanwhile, Bear is cleaning up his home. He is building a rock wall as well and possibly a fire pit. They can make a fire, cook hot dogs, and watch the sunset.

Noah and the others change the tire and get the rest of the rebar. Bam and Gabe attempt to blind hunt since they haven’t had any luck so far. While sitting in the blind, Gabe gets restless and starts talking in an array of accents. He is wearing on Bam’s nerves.

Snowbird spends time with Raiven. She wants to make sure she is the right girl for Bear. Snowbird asks her if she is ready to marry Bear. They seem to be happy together. Raiven shares that it can be overwhelming at times. Living in the bush is difficult.

Later, they sit around eating beans. Snowbird eats an onion like an apple. They are all grossed out. The next day, Alicia and Bird get the barn ready for the wedding.

Bam and Gabe didn’t shoot a deer so Gabe decides to make an old family recipe. He makes a casserole over the fire but forgets the cheese.

Just days before the wedding, no-one can find Bear. The wedding is called off. The family needs space.