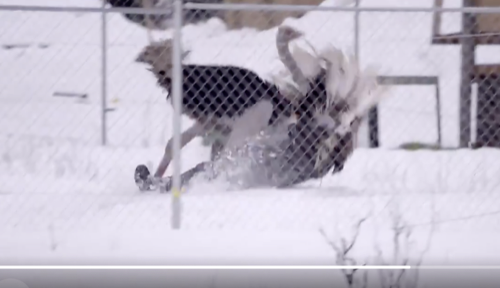 Tonight on Discovery Alaskan Bush People airs with a new season where the Wolfpack faces the biggest challenge on an all-new Sunday, August 30, 2020 episode and we have your Alaskan Bush People recap below. On tonights Alaskan Bush People Season 12 Episode 1 “Life in the Extreme,” as per the Discovery synopsis, “Gabe is attacked by an aggressive ostrich and loses one of his most prized possessions in the process. When the ranch gets hit with the first snowfall, the family builds a big bonfire to unfreeze the ground under their house site.”

Days before the wedding, no-one can find Bear. The wedding is called off. No-one knows what happened. Later, Bear sits and talks to Bird. He thought Raven was the one. He understands he is different. Maybe if he was more like everyone else, maybe she would have wanted to stay. Bird explains to him that some people aren’t compatible.

One Week Later… Snow has fallen. The family isn’t ready for this. The Brown’s are still working on the house. They need Bear but he isn’t back to his old self yet. They have cement on the way to pour the foundation but the ground is very cold. They decide to use the brush from the surrounding land to build a fire and unthaw the land.

The next day, Bam and Noah start on hauling logs and starting a bonfire. The other siblings care for the livestock. Gabe has a problem when he is attacked by their male ostrich. He wrestles with it but makes it out of the cage unscathed. He did lose his ring but plans to look for it later.

Bird and her dad talk. They decide that Bear needs to cheer up. Bird heads out to hunt for deer. Meanwhile, Rain and Bam look for Gabe’s wedding ring in the cage. They cannot go in so they are trying some interesting ways; fishing with magnets and pins.

Bird heads into public hunting lands. She comes across another hunter. She changes her path. Meanwhile, Noah gets Bear to help out with the bonfire. He hopes this will get Bear out of his shell. During their project, Bear starts to feel better and get out of his own head.

Bird comes across deer bones. She wants to take them home and add them to her bone tree. She thinks they are pretty. She makes a tent and makes chicken on the fire for dinner before turning in.

Noah and Bear build a fire and hang out forging metal. Bear gets excited, waving a piece of hot metal in the air like a sword. Noah is happy he feels better but he is nervous.

Bird wakes to heavy fog and gets concerned she may not be able to hunt. She tries always and hears gunshots. She gets nervous maybe another hunter may shoot her by accident because they cannot see. She makes her way through the woods and to the ridge to make sure hunters can see her. The shots stop. Bird plans to stay and get a deer for Bear.

Noah is determined to find Gabe’s wedding ring. He is going in the cage with a satellite dish he has turned into a shield. After making his way through feces and looking in the area where he believes Gabe had the altercation, Noah leaves the cage without the ring.

Bird is successful in her hunt and shoots a deer. Meanwhile, the siblings start a bonfire as nightfalls. Bear and Noah use gas to get it going.

Rain makes some maple candy over the fire before using the snow to cool it down. She loves sugar and the snow so she is content.

The next day after the fire Noah is able to start digging. The edges are still a bit frozen but it is working. Meanwhile, Gabe gets back into the cage to try and find his ring. He manages to grab it quickly before the male tries to attack him. He loves the feeling of victory.

Bird and Bear sit and eat deer with jalapeños. She makes sure to tell her brother that she cares for him. He seems to feel better.