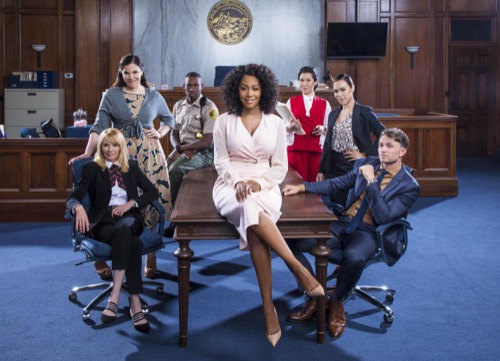 Tonight on CBS their new series All Rise airs with an all-new Monday, April 6, 2020, season 1 episode 18 called, “In The Fights,” and we have your All Rise recap below. On tonight’s All Rise season 1 episode 18 “In The Fights,” as per the CBS synopsis, “Emily’s composure nosedives when she defends a young man charged with felony domestic violence. Lola causes a rift with Mark when she reprimands his girlfriend for grandstanding in the courtroom.”

Emily is letting some stress out at the gym. Lola is talking with her fiancé. He may be headed to the L.A. field office if they hire him. Meanwhile, Mark and his girlfriend are getting ready for work. He can’t stop talking about a case dumped on his life while she just wants to know where all of her things are.

Lola meets with Sherri for breakfast. They get to talking about Sherri’s relationship, it seems her boyfriend wants to do some crazy things like sky diving and she doesn’t want to. Emily is getting ready for her first domestic violence case after having trouble with one month back. She’s very touchy and Luke and Sara take notice.

Emily meets with her client. They get down to business. He is being accused of pushing his girlfriend into a glass coffee table. When they go to look at the pictures, Emily pauses. The pictures are disturbing. But he insists that she swung at him first he dodged and she went into the table. Mark is representing the woman in the keys named Molly. Mark and Luke are going over the details. Just then their client Molly comes in. She’s not at all what they expected, very businesslike. Now they are worried about what the jury will think.

Sam is defending a case on her own. She is up against Amy who isn’t making it easy for her and is also very insulting, calling her sweetie when she fails to answer to why she is objecting. Lola calls Amy to the bench to reprimand her.

Mark tracks down Emily who cannot believe that he is going up against her. Mark wants to know if her client wants to cut a deal. Emily is playing hard and isn’t going to back down.

In court, Emily is irritable and shaking. Meanwhile, Amy is playing dirty and has just submitted evidence that Sam knew nothing about. Amy also has photos that she’s rambling on about to the point where it irritates Lola so bad she calls a recess. Luke runs to tell Mark about Amy and how she is eating Sam alive.

Is Emily talks to a client she’s starting to become aware that he’s defensive and seems to be lying.

Rachel comes to see Lola at recess. Lola cannot believe that she hired Amy, she’s a bit of a snake. Rachel likes that she’s aggressive.

Emily is extremely aggressive while doing her cross-examination. She points out that her client stopped his girlfriend from driving drunk. The judge gives Emily a look in regards to her behavior. On her way back to her seat it appears as if she’s going to have a panic attack. She’s called back to the bench where Mark asks if he can have some time to find his client who didn’t show. The judge thinks this is a good idea. Mark tries to talk to Emily outside of court but she becomes angry.

Amy is relaxing when Mark comes in ranting about his case. He sits and drinks her wine and takes a bite of her food. She is annoyed. She has had it with him. She tells him he has no boundaries. He gets up in a huff and leaves.

Mark finds his client at her school. She tells him he cannot make her testify. She admits she swung first and now she is law school. She can’t take the stand and lie. Mark promises she won’t have to lie and that he needs to pay for what he did even if she attacked him first.

The next day, she takes the stand. She tells the truth. Her story makes Emily upset and she tries to keep it together. It is her turn to cross-examine Molly. She has a hard time questioning her without being aggressive. She is reprimanded. She starts to have a panic attack. She tells them she didn’t eat. In the bathroom, Sara confronts Emily who doesn’t want to talk.

Lola has Sam and Amy in her chamber. Lola tells Amy no more grandstanding. Mark calls. Lola flips her phone while Amy smiles at her.

Emily’s client admits he lied too. She blows up, calling him spineless. She gets up and leaves. Mark and Lola meet in the stairwell. He tells her about Emily and how he just wants to talk to her. But he really can’t. They talk about Amy. Mark admits they had their first fight. Lola laughs. He seems to be treating Amy like he treats her because their relationship is the healthiest one he has had.

Lola calls in favor of Amy’s client but makes it a point to tell Sam she did well. Sherri comes back from her lunch date with the hiccups. Too many martinis.

Lola’s fiancé calls. He didn’t get the L.A. job. Mark and Emily end their case with a mistrial after the jury becomes deadlocked. Emily tells her client she is removing herself from the case. Mark finds Amy. They agree on boundaries. She pulls him aside for a kiss.

Emily sees Molly in the bathroom. They just look at one another. Later when Emily got home she finally snaps, slamming the cabinets and sobbing. Sara comes in and holds her.