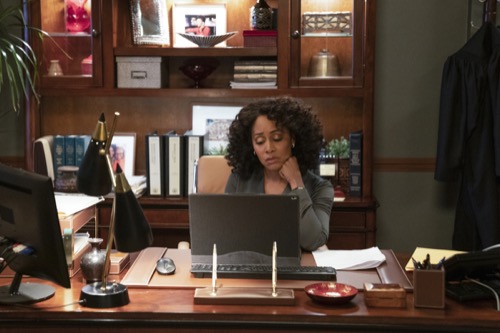 Tonight on CBS their new series All Rise airs with an all-new Monday, April 13, 2020, season 1 episode 19 called, “In The Fights,” and we have your All Rise recap below. On tonight’s All Rise season 1 episode 19 “Merrily We Ride Along,” as per the CBS synopsis, “Emily concludes a near breakdown. Mark is in an uncomfortable position after agreeing to do a police ride-along.”

Emily is decluttering the house. Mark is on a ride with a detective from the police department. Lola is visiting her parents. Her mom is in her room, acting strange and won’t come out. Mark and the officer make a stop. There is a man in the street, acting like he may be drunk. The detective approaches him. Mark watches as they tussle before the man is brought to the ground and tased.

The ambulance arrives. Mark gives a statement about what happened. He is visibly upset. It appears it isn’t happy about the way the man was treated. It is giving him a lot to think about.

Emily meets with a female client. Her client is in trouble for robbing and killing someone. She confesses to Emily that she doesn’t remember anything from that night. She will take the deal and doesn’t want to talk anymore.

At work, Lola is talking about her mom with Lu. She doesn’t think she has depression. They head into court. Emily and her client appear. Emily wants more time to talk to her client. She brings her client back to her cell and asks what happened. She doesn’t understand why she doesn’t remember. Her client shares that she is an alcoholic and has blackouts. Half of her life is a blur. Her DNA was found on the victim’s body, she had to have done it. This doesn’t sit well with Emily.

Mark finds out the man who was tased is up for some big charges, assault on an officer and more. Mark meets Lola in the stairwell. He is upset. He knows that the man didn’t look like he was reaching for the detective’s gun. Lola tells him to share his truth and what he saw.

Lola arrives at her parent’s house. She sneaks into her mom’s room and scares her. She wants to know what is wrong. Her mom shares that she went back to teach at her non-profit and it seems they don’t need her, she is too old.

Sara tells Ben he needs to tell his mom about them. He explains that she is overprotective. Meanwhile, Emily catches a break in her case. Mark and Luke watch video of the man accused of reaching for the detective’s gun.

Emily tries to figure out if the DNA was transferred in her client’s case. She arrives at court and shares that she rejects the plea deal and wants to go to trial.

Mark brings Luke out to the scene. They assess the ground. He thinks maybe the suspect tripped and that is why he lunged forward, making him look like he was going for the gun.

Mark meets with the detective and asks him if he is positive about what happened. The detective is adamant. Meanwhile, Emily is venting about. Her case to Sara who is too focused on Ben and his mother. Emily goes to see Luke and vent. He tells her she can pull it off.

In court, Emily tries to make a case that maybe her client’s DNA was transferred because the same paramedics that helped her drunk client also helped the murder suspect later. She gets a doctor to admit it is possible the DNA did transfer.

Lola confronts Emily about her demons, giving her a card to a psychologist. Lola heads to see her mom. She is out of her room and doing better. They all eat pie.

Emily goes to see Dr. Bhatti. Mark meets up with Quinn after a run.