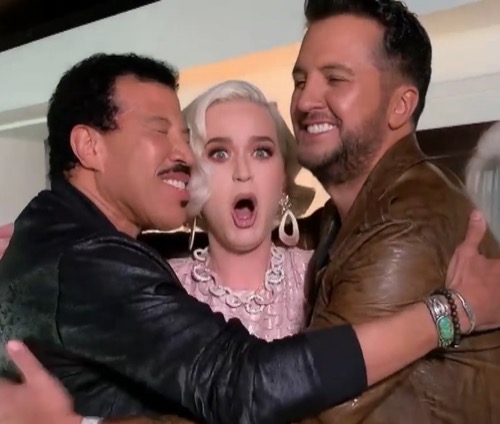 Katy Perry’s pregnancy was now an open secret. She was proudly displaying her baby bump and the baby even got a few shout-outs. They called the baby their fourth judge. Katy’s fellow judges got a few laughs out of that and they congratulated her on her expanding family. But as for the rest, the auditions continue. The judges first heard from a dental student. He was going to school while pursuing his music and he was really talented. He was one of the most original voices the judges had ever heard. They gave him the Golden Ticket and so now he has to make a choice between his music and his dental career. He couldn’t do both forever.

Next up was a guy who had never heard of any of the judges. Lou Dawg couldn’t recall them or their music and so he has stumped him when they tried to grill him. He did have his looks going for him, though. He was super pretty. He also wrote his own music and his voice was okay. It’s just he didn’t really seem invested. His music seemed like a hobby to him and it felt like that to the judges. They asked Lou about what it means to him to be here this year. He told them he didn’t really know and so he wasn’t ready. He needed to come back when he was sure he wanted this. It couldn’t be something to do.

Makayla Phillips went next. She wanted this and she’s been wanting this. She first tried out back in 2017 and she couldn’t participate because she was two weeks too young. She could have let that setback defeated her. She instead fought to come back and she gave a stellar performance. She’s been dreaming of winning American Idol since she was a kid. She used to act it out with her dolls and so she was ready. She genuinely wanted the opportunity. The judges gave it to her and they later gave it to Devon Alexander as well. He grew up in a cabin at the end of a dirt road and he didn’t have internet. His family only had one tv and they only played fox.

Devon grew up watching the show. He fought just as much as everyone else to get there tonight and he won a Golden Ticket for himself. His voice was rare. The judges thought he was top ten material and so he earned a place in Hollywood. Lou, on the other hand, was still struggling with identifying the judges. The man didn’t put in any effort to learn their names or their music. He came on the show because he was bored and he probably thought this would be handed to him like everything else is. Mosean Wilson auditioned next. Here was a young man who grew up struggling because his father was sick and unfortunately the older man couldn’t take care of himself.

His father was diagnosed with bipolar schizophrenic. His father also abused drugs and Mosean was given to his grandmother to be raised. It sadly didn’t stop him from later finding his father died from an overdose, but Mosean never let that defeat him. He started a family of his own and he put all of his pain into his music. He writes some of his songs. He was into the Blues and Jazz. His music highlighted his pain and it gave him an outlet to properly channel it. He had been great during his original song and the judges gave him the Golden Ticket. They had been looking for original singers like him and its always great when they find such a rare gem.

There are also other times when the judges just catch a spark of something. Something they can’t quite put a finger on and so they roll the dice. They’ve given the Golden Ticket to plenty of people whose voices were all that great. They just saw them and saw something in them that was just right for Hollywood. Sometimes it’s the confidence and sometimes it’s dancing. Its why this show is so different from other vocal competitions. The judges next heard from a duo. It was a young couple named Kat and Space Cowboy. His real name is Alejandro. He just goes by Space Cowboy as his stage name and he even has the hat to wrap up the look.

Kat and her boyfriend performed “Shallow”. They looked at each other like Lady Gaga and Bradley did and it was so sweet. Their voices also complimented each other rather well. The judges said yes to both and hopefully, they’ll both make it to the end. Next up was several contestants. They all brought in guitarist, keyboards, and even pet pigs for luck. It must have worked because they all made it to through to Hollywood. Then came Tavia and Terry. Terry was the guitarist and she met Tavia through a third party. Tavia does hair. She had needed a guitarist and so one of her clients hooked her up with Terry.

They just met forty-eight hours ago. Neither of them were background and so they each stood out during the performance. It just wasn’t that great. Tavia’s voice was dicey and she told them this was her first time trying out. She had needed a little more experience under her belt. Maybe once she rids herself of her nerves she’ll be ready and so she can always come back. She should especially bring Terry because Terry was fun. Terry was from the UK. She joined the US Navy to get to the states and she was a pretty cool guitarist. She and Tavia may have missed out on the Golden Ticket this time, only there’s always next year.

Sophia Wackerman went next. She comes from a musical family. Her father is a drummer and her late mother was a singer. Her mother died when she was sixteen from cancer. It had been hard on Sophia and so the judges mentioned she could take on her mother stage name in honor of her. Her mother was known as Noami Star and so Sophia could become Sophia Star. The judges had liked the name when they tested it out. It suits Sophia and again she could use that to honor her late mother. Sophia has a strong voice. She performed “Water” and it had been a great performance. She has an amazing voice. There was a touch of the professional about it.

She also showed them she was a threat to the piano. Her voice did waver a little. The judges assured her they could coach her through that and so they gave Sophia the Golden Ticket. Next up was Jimmy Levy. He comes from a family of mediums and he can see dead people. He’s been seeing them a lot lately because he auditioned in Savannah and the city was known to be rife with ghosts. He was such a medium that he even put his hand to head when he was singing and so Katy actually stopped his performance to let him know what he was doing. He stopped the hand to head thing. At least for a while until he started it up again and he sang an entirely different song.

Jimmy’s quirks will need to be worked out. Only, for now, the judges were willing to take a chance on him and so he got his ticket to Hollywood. Olivia Ximines went next. She was on her school’s dance team and the team came out to support her. They performed in front of the judges and so Olivia got to show she was a double threat. She can sing and dance. She showed off her dancing skills and then she showed the judges that she could sing on top of it. The judges ended up giving her the Golden Ticket as well. And she and her dance team were so happy afterward that they practically ran over Ryan on their way out.

Marna Michele went next. She grew up wanting to be on American Idol and she didn’t let her disability stop her from pursuing her dream. Marna used a wheelchair. Her bones are too weak to hold her upright and she could have gotten depressed or have given up and she didn’t. She counts the wheelchair as one of her best friends. She also knew how important it was for children who were growing up to finally see representation. Marna has a good voice. She impressed the judges with both that as well as her personality and they gave her the Golden Ticket because she earnt it. Marna was going to Hollywood.

Next up was Zack Dobbins. He grew up in a musical family because both his father and his grandfather played bluegrass. He came to American Idol because he gave his word to his ex. He promised he would try out and in spite of their breakup he was still a man of his word. Luckily, for everyone, he had a good voice and he was good on the guitar. The judges sent him to Hollywood and he wasn’t the only one to go. Several people were given the Golden Ticket and the judges ended the night with Ren Patrick. She was another one that always knew she wanted to be a singer and she thankfully held onto her dream through harsh conditions.

She was with someone that had abused her. He distanced her from her family and he controlled everything about her for years. It had taken Ren all she could to walk away. She returned to her family and she made up for all the time she missed with them. Ren and her mother were taking a road trip when her mother suggested she try out for American Idol and it’s a good thing she did because she has a beautiful voice.

Ren is going to Hollywood and the closest her ex is ever going to come near her is watching Ren on tv.