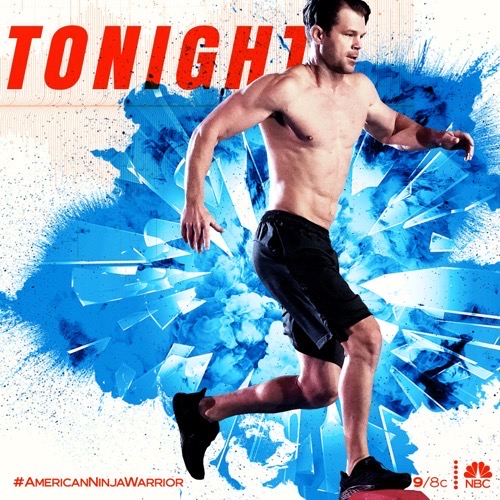 It’s part two of the Semifinals! ANW continues to film the current season from St. Louis, Missouri and it was there that their first ninja of the night had his run. Verdale Benson is an essential worker. He’s been on the frontlines of the pandemic and he took on the course with the same gusto he does his job. Verdale seemed to be doing really well on the course. There was some fear when it came to a certain obstacle and it was Burn Rubber. He had taken his time on that one because he thought the balance obstacle would get him and thankfully it didn’t. He was able to overcome it. He kept on moving and it soon became clear that his upper body strength was lagging.

Verdale was tiring out on the course. He was built like a football player and, while many would think the muscles would help him on the course, it actually works against him. He was too heavy for the obstacle course. He had to pack on the weight to gain those muscles and so something like the Corkscrew ended up screwing him over. Verdale couldn’t hold on as his body weight was span into a circle. He fell and depending on how far he got fast enough he might not making it to the Finals. The eighth obstacle took out several more ninjas during the commercial break. It was the obstacle to beat and everyone knew it.

Dan Polizzi had his run tonight. He usually has his best friend Brandon there on the sidelines rooting for him and unfortunately, the pandemic changed that. ANW has limited the sidelines to only people who were having their run tonight. Everyone else had to watch from home and that included Brandon. Brandon was still cheering for Dan, though. He cheered as Dan sailed through the first half of the course and his fellow firefighter had been the first to make it past the Corkscrew tonight. Dan was another big guy because he was mostly muscle and that worked against him on the Dungeon. He hadn’t been able to maintain his grip with such weight pulling him down on the obstacle.

Meagan Martin went next after Dan. She comes back to the course newly engaged. She and her boyfriend got engaged fairly recently and they fell in love over their shared interest in rock climbing. Meagan credits rock climbing as her favorite exercise routine. She tends to do really well on the course and so tonight was a shocking upset. Meagan fell during the first half. She fell on Burn Rubber when the last wheel span out from underneath her and so this it. This was her last chance at the finals and she lost it. It was now up to the remaining female ninjas to represent womankind. Jesse Graff will have her run later on and people were already putting their money on her.

Alex Carson was a part of the Cake Ninja Crew. He was a Cheesecake expert and he did really well during City Qualifiers. Only tonight he fell during the Slingshot and there went any hopes of him in the Finals. Alex came with David Wright. Wright was the original Cake Ninja and he eats cake before every run. It said sugar was his superpower and he was doing really well tonight until he fell on the Dungeon. He made it to the ninth obstacle. This could be enough for him to make it to the Finals and up next was the third member of their team. Amir Malik was another baker. He was also super light. He probably weighed the least on the course and he also has a heart condition.

In spite of the health scare, Amir was quickly proving to be a formidable opponent on the course. He smoothly glided the first half and the back half of the course seemed easy. Amir was the second to make it past Corkscrew. He was also the first to make it past the Dungeon and he went further than his own mentor. Amir was making it up the Spider Trap when he came short of a buzzer because of those final doors. He couldn’t generate enough strength to lift the doors and he fell. He still pretty far and so he was making it to the Finals. Whether his mentor will be there or not was something still up in the air.

Sean Bryan had his run. He was coming back from a shoulder injury and it must be aching him because he was another shocker. He fell on Slingshot. The Papal Ninja was knocked on the fifth obstacle and up next was Najee Richardson. Najee chose tonight to speak about something that happened to him. He was younger when suddenly a group of white teenagers attacked him and they were yelling racial slurs as they assaulted him. Najee thought he would get help when the police arrived, but the police chose to arrest him and they would have taken him to prison if a couple of witnesses hadn’t stepped forward.

It was only because of the kindness of strangers that Najee wasn’t detained. Therefore, this year with all the things that have come out about other black men being killed because they are deemed suspicious just for the color of the skin, this year has encouraged Najee to speak about his own experience. He understands the frustrations that are going on with the world. He wore a Ninjas for Black Lives t-shirt so that everyone knew he stands with Black Live Matter. Najee was wearing the shirt as he became the first finisher of the night and so tonight was a big moment for him in more ways than one.

Jessica Helmer who was hoping to make a comeback tonight had ended up falling on the third obstacle. Will Schlageter was another hoping for the same thing. He fell much too soon during the Quarterfinals and he was here tonight because of his mentor Joe Moravsky. Joe won on the Power Tower. One of the perks of doing so was that he got to bring his team with him to the Semifinals and so Will was given a second chance. He’s watched the show since he was a kid. He just had to hold on long enough to make it to the Finals and he may have done so when he made it to Corkscrew. He also fell on Corkscrew and so he’ll have to wait to see how well he does compare to everyone else.

Lorin Ball went next. He was a veteran of the show and he was another one to fall during the first half. There were plenty of veterans there tonight. They either fell so shockingly that no one will forget it or they were the victims of the Corkscrew. Brian Krestch fell on Corkscrew and so did the man is known as the godfather, David Campbell. Tonight just wasn’t the night for veterans. Lance Pekus soon had his run. This was his ninth season competing and his exit was a quick one. He fell on Burn Rubber. He won’t be making it to the Finals and if there was one highlight it would be that he gets to go home to his beautiful family.

Tiana Webberley had her run. It was another quick one because she fell during Clockwork and up next was Mady Howard. She was one of the few women to press a buzzer during the Quarterfinals. She was one of the frontline workers that the show has been honoring this year and she too fell on Burn Rubber. It was a balance obstacle. It was also knocking some of the top ninjas tonight and it just wasn’t fair. Tage Herrington didn’t make it past the first half either. He fell on Slingshot because he hadn’t kept the bar balanced and so this was it for him. He has to wait a whole new season before he tries again.

Michael Torres had his run next. It’s been a pretty busy year for him. He was building an obstacle course at home and he was also building his house. He also got married. He and his wife had a virtual wedding and so Michael has been busy. He’s done a lot during the quarantine. Life was just returning to normal when ANW called and Michael couldn’t resist. Michael sailed through the first half of the course. It was the second half that was a true test. Michael made it past the Corkscrew and the Dungeon was nothing for him. And so all that stood in his way was Spider Trap and Michael quickly hit a buzzer after defeating it.

Ben Melick feels quickly out of the gate. He was brought along as part of RJ Roman’s crew and a third member had fallen early on in the show. Only RJ Roman was left. He sped through the first half of the course and he held on in spite of everything during the second half. RJ became a rare finisher. They weren’t a long line of finishers tonight because the obstacle course has been too hard for some of them and Devin Harrelson was up next. He has never hit a buzzer. He said he’s cursed to always come short and he wanted to end that curse tonight. Devin made precise movements during the first half. He came up his Warped Wall and so it was the second half that was his undoing.

Dougie Fresh fell on Corkscrew. Like a lot of people did and so there’s still a chance he might make it to the Finals. There were two more finishers during the commercial break. Jessie Graff had her run when the show came back and she went an aggressive route. She aggressively went after each obstacle and she was doing so well until she came across the Corkscrew. The Corkscrew was the end of her run. She fell on the last peg of the obstacle and, seeing as she made it far rather fast, the odds are that she’ll be going to Finals. And next up was the Weatherman Joe Moravsky who was going to have the last run of the night.

Joe has been a stay-at-home dad with his kids. He’s been the one entertaining them and helping them study. He also a third child on the way. His wife heavily pregnant and so the prize money would be wonderful right now. Only Joe has gained weight in quarantine. He has a dad bod now and he didn’t let that detail get in the way of becoming a finisher. Joe raced through the course. He even made the final climb up the Spider Trap were mere seconds because he wanted to finish with the fastest time tonight. And that’s exactly what he did.