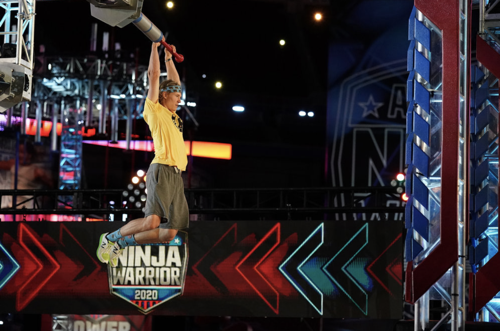 28 top ninjas face up to ten diabolical obstacles including Falling Shelves and Dragonback, which are new to the course this year. The top eight advance to the Power Tower Playoffs to compete head-to-head to determine a winner.”

It’s the Finals! A hundred ninjas entered the competition six weeks ago and now only twenty-eight remain. However, only the top eight will advance from here. The top eight have to battle it out on ten tough obstacles and two of them are new. There was the Falling Shelves during the first half and Dragonback during the second half. Jackson Twait was the first to experience the course. He made it to the Power Tower last year as a rookie and so many considered him a serious contender. They never thought he would fall on Falling Shelves. The newest obstacle was proving to be difficult and it was up to the Big Dog to take it down.

Jody Avila had his run next. He was also known as the Big Dog because he was quite tall and quite heavy compared to other ninjas there tonight. Jody hoped to one day not be referred to as a big ninja whenever he makes it far in the competition because he doesn’t want his run to be considered a surprise when it turns out successful. Jody left his wife and his two kids home as he made his run this year. His run wasn’t all the way smooth because he did fall and he almost landed in the water on the balancing obstacle, but thankfully he held on and he was able to shake off a limp. Jody was doing well when he came across Slam Dunk and that’s the obstacle that defeated him.

Jody had to use both hands to do well on that obstacle and his left hand was just a little late to the party. He fell into the water and odds are he won’t be making it into the top eight. Next up was Flip Rodriguez. Flip experienced a personal loss this year as someone passed away and so it was tough on him bottling up his emotions. He thought he was doing well when it turns out he needed a good cry. He realized that after he fell during the Semifinals and he just cried his eyes out. He missed Maui. He never gave himself the chance to grieve and now that he has he feels better. He was also doing better on the course.

Flip had no problem with the first half of the course. He sailed through that smoothly enough and so it was the newest obstacle Dragonback that brought him down. Flip didn’t know how to tackle this new obstacle. He was the first person to ever experience it and now the others know what not to do. Jeri D’Aurelio went next. She fell during the Semifinals on the Sling Shot and so she was hoping to vindicate herself tonight. She was a JAG lawyer. She defended her fellow servicemen and women in court and she was representing the military tonight. Jeri was doing well on the course. She was smiling throughout all of it and she was still smiling of Falling Shelves when she slipped.

Jeri fell into the water on Falling Shelves. She’s not out of the running and it was onto the next one. Michael Torres has his run next. He has a huge support group there for him and they were chanting his name as he seemed to be sailing his way through it all. Only the DiamondBack obstacle tripped him up. It was the balance obstacle and it can’t be quite tricky if the ninjas weren’t paying attention. Cameron Baumgartner went next. He too had a very enthusiastic cheering section because his mother has been there with him throughout it all from heart surgery to ANW. She was still screaming her head off as Cameron was the second person to make it to Dragonback.

He was also the second person to fail on Dragonback. Cameron held onto the pole too long and he missed his chance at being the first to make it to the Spider Trap. Najee Richardson had his run next. He was known as the Phoenix because it looked like he flew through the obstacles. He also hit two buzzers this season and that was great for him. This was after a horrible season a year before. Najee now says he wasn’t in the right headspace and resolving that has helped him tremendously. Najee was now ready to win it. He flew through the course and, in spite of almost falling on Diamond Back, he kept going until he became tonight’s first finisher.

This has been the dream season for Najee Richardson. He’s done everything perfectly and he showed everyone had to finally make it past the Dragonback obstacle. Next up was Jamie Rahn. He was known for the crazy bright green hair and the superhero costumes. His fans usually brought out the green wings for him and so his family was wearing their wings at home. They could be seen cheering for him through the video feed. They like everyone else knew Jamie was coming back after sawing off the tip of his thumb and he was doing so well without it. He had no problem with the first half of the course. It was Dragonback that got him.

Dragonback was a notoriously difficult obstacle. It knocked out some promising ninjas and there was no telling who would be its next victim. Dan Polizzi has his run next. He was a firefighter back home. He lived and worked in the Midwest, but he traveled out to California to help with the wildfires there and he was glad to be representing firefighters and EMS workers tonight. He was also the oldest man left in the competition and he was doing well until Diamond Back. The balancing obstacle got his best friend and the other half of the original Power Towers and tonight it took out Dan. He never even made it to Dragonback.

Lucas Reale went next. He lost his dad when he was sixteen and his grandparents stepped in to fill the gap. They helped him over the years. They’ve been there at every competition and normally they would have been on the sidelines tonight cheering him on. The pandemic changed a lot of things for him and everyone else in the competition. His family had to watch his run from home and he did not disappoint. Lucas had no trouble with the obstacle course. He even made Dragonback look easy and he became the second finisher of the night. He also has the fastest time because he was three seconds faster than Najee.

Sandy Zimmerman went next. She was the only mother left standing in the competition and she was the oldest person left in the competition. Sandy had taken some time after the Semifinals to relax only she’s back now and she’s back with a vengeance. She was doing well. She was on a roll until Falling Shelves. Her hands didn’t grasp it at the same time and she fell into the water. Next up was Donovan Metoyer. He was known as the Classy Ninja because he ran the course in a three-piece suit and he’s been having a great season so far. He did a twist on the Warped Wall last time that everyone was looking forward to tonight. And unfortunately, he never made it.

Donovan fell on the Spin Hopper. His run tonight ended much too soon and his classy style will be missed. Austin Gray went next. He was known to wear a shirt advocating for people to make kidney donations and he’s an advocate because he donated his own kidney to his longtime friend Kaylee. The shirt said, “share your spare”. You only need one kidney and you can save a life with the other. Austin donated his own and less than six months later he was on the obstacle course. He was considered an elite athlete. He went on to become the third finisher of the night and he asks everyone to share their spare.
Tyler Gillett went next. His run ended before it had even really begun. He wiped out on the second obstacle. He was a top-level ninja and he fell because of his hand placement. Tyler was still raising money for cancer research and so hopefully his message will live on. Next up was Chris DiGangi. He was here with his fiancé Jesse Labreck and the two did everything together. They trained together. They also tend to fall on the same obstacles as each other and so what must it mean for Jesse if Chris fell on Falling Shelves. Jesse had her run after Chris’s. She was considered the top female ninjas and she’s known for hitting that buzzer.
Jesse grew up doing activities with her dad. Her dad sadly couldn’t be there tonight because he had to stay home like everyone else and so Chris and her fellow ninjas had to be her cheer squad on the sidelines. Jesse must have remembered Chris’s mistake because she didn’t repeat it. She made it past the Falling Shelves and she was doing great. This was perhaps the greatest she’s ever done. She became a finisher tonight. She was the first woman to become a finisher and she also might be the first woman to make it to the Power Tower Playoffs.
THE END!