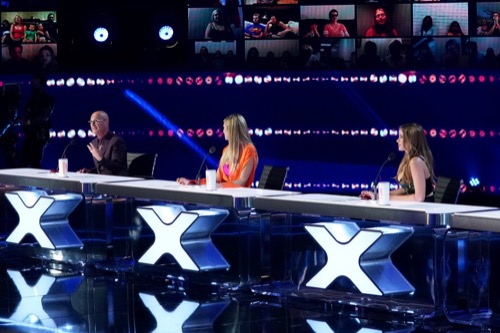 Tonight on NBC America’s Got Talent begins with an all-new Wednesday, August 26, 2020, episode and we have your America’s Got Talent recap below! On tonight’s AGT season 15 episode 16 “Results Show 3″, as per the NBC synopsis, “Five acts from the previous night’s show will move on to the semi-finals round of the competition. Viewers will have one last chance to send their favorite performer of the night into the next round..”

Its Night Three of the Result Show! Tonight there were just three judges sitting in. There were usually four judges, but with Simon injured and at home, they would opt to bring in a celebrity guest judge and so it was a little surprised when they chose to forgo one tonight. AGT chose to make do with Howie, Heidi, and Sofia. The judges watched alongside America as ten acts performed last night. There was a little bit of everything from a controversial stand-up act to a flawless performance from a great singer. These were the acts that were being judged and now its time to reveal who made it to the Semi-Finals.

First up was the Dunkin Save. The Dunkin Save saved one act out of three and it gave America one last chance to vote until the end of the episode. The three acts that were up for voting were W.A.F.F.L.E. Crew, Malik Dope, and Nolan Neal. Which shocked the judges. The judges had enjoyed all three acts and they didn’t understand why America hadn’t voted for them earlier. Only that window was still open. America can still vote and whoever they chose was the best act of the night according to Howie. He was joking as he said that because he had told each act that they were his favorite and so he was one of the judges that didn’t understand why these three acts were so near the bottom.

The rest of the acts were closed to voting. Their fate had already been decided and so it was time to reveal it. It was revealed that out of the two – Alan Silva and Dance Town Family – Alan was the first to make it to the Semi-Finals. He was an Aerialist. Sofia had noticed that he always shined with happiness and had a huge smile whenever he performed. She was therefore glad tonight to see that he made it to the next round and the good news kept on coming. The next person to be joining Alan was Cristina Rae. She was up against Annie Jones and Sheldon who were both just as an incredible Singer as she was and she beat them both.

Cristina, who was never far from her young son, was glad to show him that anything is possible. She pursued her dreams and it looks she might just win this year’s competition. Cristina and Alan were joined in the Semi-Finals by Max Major. He was a Magician. He beat the group Bone-Breakers and the controversial Usama Siddiquee. One was a Contortion Dance Group and the other was a Stand-up Comedian.  Usama was so controversial because he leaned more towards misogyny than he did anything that was actually funny. And so the judges started to laugh with him, but then they just kind of got tired of his act before he had even finished it.

Now for a walk down memory lane. Back in 2016, a former NFL player came on to the show as a magician and he made it all the way to the final three. He later came back several years after that for
“AGT: Champions” and again he was cheated out of a win, but he was still fun to watch. Jon Dorenbos was great the first time around. He’s even better now and he came back tonight to perform for the audience. He did this cool thing with cards. He was always great with a card trick and he had everyone looking one way all the while he pulled off a great act of magic. And it was great to see him again.

The show brought back their alumni for performances. Jon went and then the show did a cutaway to trivia about the cast. Like for instance, did you know Sofia came up with the name for her son after watching Scarface? The other three judges, which included Simon because it was prerecorded, had all guessed it correctly. They also video-chatted with Sofia’s former castmate and he revealed that Sofia falls down a lot. She hasn’t fallen while on AGT. She has the fact that she seats most of the time to thank for that and even Ed O’Neill thought so. He was enjoying his retirement in Hawaii. He didn’t seem to be in any rush to want to come back and so good luck to him and the rest of the crew of “Modern Family”.

The show did come back to the voting. Dunkin Save was closed and America voted to save W.A.F.F.L.E. Crew. The Dance Group shall live to dance again at the Semi-Finals. And with them now safe, it came down to Malik Dope and Nolan Neal.

The judges voted to save one and they ultimately sent Malik Dope to the Semi-Finals!