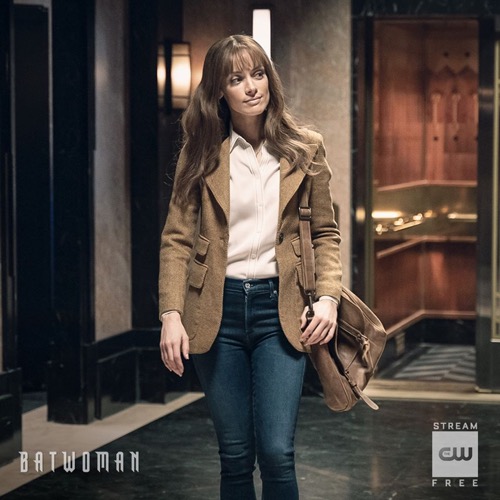 Tonight on the CW the series Batman airs with an all-new Sunday, February 16, 2020, season 1 episode 12 and we have your Batwoman recap below. On tonight’s  Batwoman season 1 episode 12 called, “Take Your Choice” as per the CW synopsis, “As Kate is pulled between two sisters, Luke and Mary are tasked with finding the cause behind Beth’s debilitating headaches. A visitor delivers some good news to Jacob, while Sophie takes her new role to the extreme and Alice makes a devastating discovery.”

Jacob and Sophie are speaking to a doctor, they want him to testify that it is possible to make a mask, cloning someone’s face, with skin fragments from corpses; they believe Alice did it. The doctor tells them to get him an interview with Mouse and he will sign an affidavit saying this is possible and an innocent man is being framed.

Beth, Mary, and Luke are in a car and are stopped by the police. Mary reminds the cop who her father is, the cop is about to leave when he hears a noise in the backseat. Mary and Luke get out of the car, Beth is still in there. Batwoman arrives and distracts the cops, tells Luke, Mary, and Beth to get out of there.

A cop is looking for Alice, she takes a knife and throws it into his neck killing him. Alice and Beth are both having severe migraines. Beth thinks that there is not enough room in the universe for both she and Alice, and that is why she is getting the migraines. Kate tells Beth she is not going to die. Mary thinks they should get her to a hospital, but Luke thinks the crows will get her before they can treat Beth. Bother Alice and Beth are getting sicker, Alice is coughing up blood.

Alice goes to see Mouse in the hospital, he doesn’t believe it is her. He tells her that he saw a girl that looks like her. All of a sudden, Alice has blood coming from her ear. Mouse is wondering what is wrong with her, she tells him not to worry, she is looking for answers, and when she finds them, she will come back to get him.

Batwoman meets up with Sophia, she tells her to stop the shoot to kill on Alice. A manhunt like this will put innocent lives in jeopardy. Batwoman offers to find Alice, Sophie says she can’t do that.

Jacob is in prison, he gets stabbed in the side.

Luke and Beth are trying to think of what they do to save Beth, but she knows that in order for one of them to live, one of them has to die. All of a sudden, Alice walks in and tells Beth that she is not her. Alice says this thing is very absurd. Kate walks in and tells Alice to leave Beth alone. Alice asks Beth how she survived the crash, Kate says she didn’t go over. Alice figures out that in Beth’s world, Kate pulled her out of the car and saved her. She says she always wondered what her life would have been like if Kate had saved her. Beth says they are an anomaly of intergalactic proportions. Alice gets it, so in order for one of them to live, the other must die. Alice takes out a knife and throws it at Beth, Kate catches it before it hits her. Alice and Beth have another migraine, Alice escapes.

In prison, Jacob is fighting for his life. A prisoner comes in and saves him but tells him that he owes him a favor now that he has saved a glorified cop.

Alice goes to see Mary and tells her to help her, and reminds her that she saved her life.

Mary wants nothing to do with this and tries to leave, but Alice smacks her across the head and Mary falls to the ground.
Mouse is being heavily guarded, the doctor who was speaking to Jacob and Sophie, Ethan Campbell is there to see him. Mouse tells him that he is not speaking to anyone. Dr. Campbell is not a doctor, after all, it is Mouse’s father. He takes off his mask and reveals himself. Mouse says he thought he was dead. Mouse is terrified. His father wants to know where Alice is, he says she is a broken little girl who took advantage of him. Mouse says Alice is his family, she accepted him for who he is, the burns, his face, everything.

Mouse says that he will never betray Alice. His father goes over to his bag and he takes out a huge needle with serum in it, he injects it into his neck, and at the same time, Alice is injecting something into Mary. Just then, Mary gets the will to fight Alice, she manages it to throw her to the floor and handcuff her to a bed. Alice sees phone nearby, she calls the police and tells them she knows where the leader of the Wonderland gang is hiding. Meanwhile, Beth is why Kate and she is getting sicker. She tells Kate that she has what she always wanted, a soulmate. All of a sudden, the crows and Sophie are outside, Alice tipped them off and said Beth was the leader. Luke comes in to see Kate and Beth, he tells them that the crows are in the lobby. Luke grabs Beth, he and Kate take her down to the bat cave.

Kate seeks out Mary, she says that Alice gave her antidote when she gave her the poison and if she injects her blood into Beth, she will save her. Kate is conflicted, she doesn’t want to let Alice die. Mary tells her she can only save one, the choice is hers. Kate goes to see Beth and tells her about the blood, Beth says that after spending time with Alice, her rage, her pain, now she understands her. Kate tells Beth she didn’t save Alice, she did nothing.

Kat then goes to see Alice, she holds her hand and tells her that she came there to say goodbye to her. Alice starts to cry. Then, we see Kate injecting Beth with Mary’s blood. Beth asks Kate how she will ever be able to thank her, she says live, that is all that matters. We go back to Kate and Alice, both are crying. Kate says she couldn’t save her, she can just sit with her see her be in peace.

Luke uses the batmobile and escapes the bat cave with Beth. Meanwhile, Mouse’s father has him captive, and leaves him there, telling him that he will return soon.

Kate and Alice are on the floor, Alice is dying. Kate is beside herself in grief. Luke arrives at the Twin Pines Inn, the crows are there, they don’t shoot Beth, Mouse’s father does. All of a sudden, Alice is not dead after all, she looks at Kate and says you let me die, then hits her.