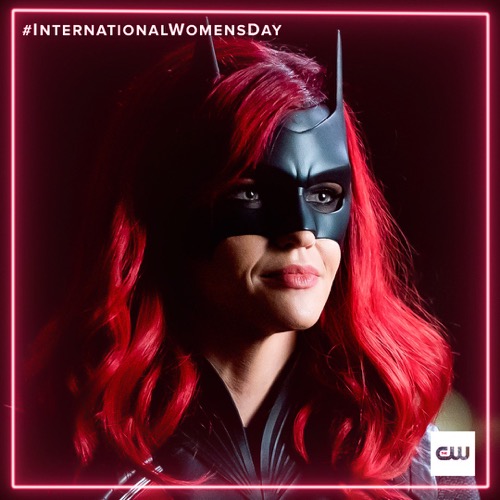 Tonight on the CW the series Batman airs with an all-new Sunday, March 8, 2020, season 1 episode 14 and we have your Batwoman recap below. On tonight’s  Batwoman season 1 episode 14 called, “Grinning From Ear to Ear” as per the CW synopsis, “Batwoman (Ruby Rose) and Luke (Camrus Johnson) are on the trail of a villain targeting social media mavens.

Sophie (Meagan Tandy) gets an unexpected visit from her mother, and Mary (Nicole Kang) offers her expertise to assist Kate. Jacob Kane (Dougray Scott) is approached to make good on a favor, while Alice (Rachel Skarsten) focuses on her plans for retribution.”

We see a young, she is putting makeup on, she looks in the mirror and doesn’t see what we see, she sees her face distorted. She punches the mirror, and then takes a piece of the broken glass and cuts her face. Her mother is calling her, comes into the bathroom and screams when she sees what she did to her face.

Mary bumps into Sophie and finds that she looks very happy considering she got suspended from the Crows. Elsewhere, Luke finds that Kate is in a really good mood as well. Sophie tells Mary that she had a moment with Batwoman, Mary asks if she knows who she is, Sophie doesn’t. Kate tells Luke she shared a kiss with Sophie. Luke doesn’t like it, if Batwoman’s enemies find out that she has a relationship, it will make Sophie a target.

Alice is furious, her obituary in the paper is a tiny little blub under the fold that calls her a mentally deranged leader and no services are planned at this time. One of her cronies found Mouse’s dad.

Jacob has a lawyer visit him, his client is Reggie Harries and he wants his case moved up, he is told that he owes him his life for saving him in prison. Furthermore, if Jacob doesn’t do it, Reggie knows some things about the Crows that can blow the place wide open and he will tell if Jacob doesn’t help him.

Sophie gets all dressed up, Batwoman arrives on her balcony; she invites her inside, but she says she can’t. She came there to tell her this has to end because she doesn’t want her to get hurt. Sophie doesn’t care, Batwoman says it is not that simple. Sophie walks up to her, gets really close, then tells her to walk, they kiss. They hear a noise, someone is at Sophie’s apartment. It is her apartment, she was surprising her.

A woman is at a photoshoot and lights go out, she asks who is there, nobody answers, but she sees a woman with a mask over her face, who shows a knife. The intended victim starts to run for her life.

The next day, Luke and Kate are talking about the victim, her name was Kimberly Wright, her attacker was a woman in her twenties, who wore a hoody and a surgical mask. And, the victims get their face’s cut, but not their bodies. Kate says this is definitely personal.

Kate goes to see May, she says she barely knew Kimberly. Kate says that people were whispering that maybe Miley could be involved. And, if she is looking into this, she can poke around for some clues. Kate says she’s good.

Sophie’s mother wants to know what happened with her and her husband, she says she fell out of love with him. Jacob told her mother that she was suspended. Sophie says she can’t work with the crows when they don’t believe in her values.

Sophie and Batwoman meet up, Sophie tells her that her mother is there. Batwoman talks business and tells her that she did some digging, she thinks the slasher is targeting patients of plastic surgeon. Sophie goes to see the plastic surgeon, during their conversation, he tells her that he treated a patient years ago for self-inflicted cuts on her face. Batwoman goes to the woman’s apartment and finds a book of model’s faces that seems to be a sort of hit list. Batwoman hears a noise, she goes downstairs and finds that the woman is there and she has a victim, she cuts her throat in front of Batwoman.

Back to Alice, she is trying to think of ways that she can torture Mouse’s father. She has nabbed Dr. Malone, asks his opinion. He tells her she needs someone else there when she confronts him. She thanks him then sends him away from all the while he is screaming for her not to kill him.

We see Mouse tied to a chair, he asks his father how long he is going to keep him there, he says as long as it takes for him to come to his senses. Then he tells Mouse that he killed Alice, he shot her, and she is better off without her. And all he has done is protect him from the cruelties of the world.

Batwoman visits Mary again, she asks her if she can help her ID someone. Mary ID’s her right away, Veronica May, Mary tells her where to find her, on her makeup truck that she owns.

Batwoman arrives at the makeup truck, there is blood on the ground and Sophie is there, she tells her that the crows will be there any minute. The crows arrive, Sophie jumps on the back of Batwoman’s motorcycle and they take off.

Alice and her henchmen arrive at Mary’s clinic. Alice tells her that she saved her, so she owes her. Alice steals some supplies, Mary asks her if she knows where Batwoman is, she says yes and if she doesn’t know, they are really not pals after all.

Veronica May is hanging from ropes. The killer tries to escape, but Sophie is there and tries to stop her. Sophie is successful, meanwhile, Batwoman saves Veronica May just in time.

The killer is tied up, Alice walks in, she says she is an ally and she can’t get revenge for both of them, but first, she needs something from her.

Jacob has a bank statement, the crows were sent $50 thousand dollars and he is wondering why.

The police have arrived to pick up the killer, they find her without her face, Alice skinned her. And, in the next instance, we see her at Mouse’s father’s office. He asks her how she got there, she says she just flashed that pretty smile he gave her. She pulls off her face mask, it is really Alice underneath. He says he shot her, it can’t be. Alice hits him.

Sophie’s mother is still at her house, she tells her it is criminal to be charged five dollars for coffee. Sophie tells her that she lied to her the other day, she didn’t break up with Tyler because she fell out of love with him, she broke up because she was never in love with him. She met someone, and for the first time she was happy, really, really happy, and she wants to find that again. It is not a him, it is a her, for years she kept it a secret. Her mother looks upset, she tells Sophie off. Her mother gets up and walks out.

Mary goes to see Kate, she tells her that she never worries about her judging her because she knows she can trust her and she hopes one day, she will feel the same way about her.

Alice and her henchmen have Mouse’s father, he asks her what she wants. She tells him to drop the act, she thought she would never have to see him again. He says if she is going to kill him, just do it and get it over with. She says she would never kill him. She wants her brother mouse, surely he has him, and she wants him. He starts to laugh.