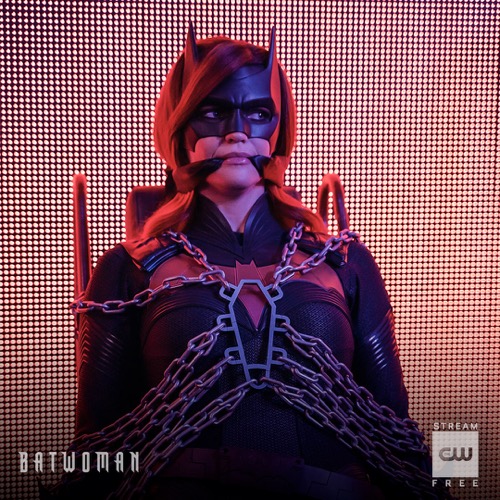 Tonight on the CW the series Batman airs with an all-new Sunday, May 3, 2020, season 1 episode 18 and we have your Batwoman recap below. On tonight’s  Batwoman season 1 episode 18 called, “If You Believe Me, I’ll Believe In You” as per the CW synopsis, “Batwoman asks Luke and Julia to do some undercover work to retrieve an item from her cousin’s collection; Alice gets a surprise visit from Jacob Kane; Mary tries to prove herself.”

Kate is on the job to rescue some people who are in a truck and being sold. She takes down all the bad guys and rescues them. But its not without hurting her hand when one of the bad guys grabbed her wig.

Sophie is on the job with a co-worker, Julia, she asks her if she was the smoking gun that leads Tommy Elliott to the murder of Luscious Fox, where would she be. Julia calls Kate and tells them they have gone through the entire place and no Luscious Fox journal. Kate knows who she has to go see for information.

Kate goes to see Tommy, he looks pleased to see her and calls her candy cane. He asks her if she has heard from Bruce. She mentions Luscious Fox, and says that he had him killed for his journal, he wanted the keys to the candy store.

Alice is in Tommy’s cell, he tells her to get out. She says the cell will be hers when they arrest him for murdering Luscious Fox. Arkham’s Chief Medical Officer, Butler, comes to the door of the cell and tells Tommy that he got a call from a judge asking him his fitness to stand trial, and he couldn’t lie, so the Crows will be there soon to collect him. Alice says that they are going to help him because he is going to help them in return.

And, she couldn’t help but listen to his visit with Kate. She wants to know why Kate wants the journal. Tommy says it is a failsafe to kill the bat. Alice wants to know why the R&D would be in that journal, he says because Bruce Wayne is Batman. Alice wants the journal. Tommy doesn’t understand what is going on, Mouse removes his mask and shows that he is not the Chief Medical Officer after all. Alice turns to Tommy and tells him they can get him out of there, they can turn him into anyone he wants to be.

Kate and Luke are in the bat cave, they overhear a conversation with Tommy and an associate regarding the journal, he has it locked in a safe inside his club and he wants it. Kate turns to Luke and tells him that they are going clubbing.

Mary wants to go to the club with Kate and Luke, Kate says no it will be filled with mobsters. Julia walks in, she is going on the case with Kate. The two enter the club; Luke is listening in. Inside the club, Regan recognizes Kate and gives her a drink on the house. Regan makes her drink and says it is called, “I sort of thought you would fight harder to win me back, I have regretted it ever since.”

Julia pulls the power in the club, Kate gets into her Batwoman attire. Julia has been grabbed, it’s a trap. Kate finds the journal just sitting on Tommy’s desk. She grabs the journal and she gets knocked down, it was a trap.

The Crows arrive at Arkham and find that Tommy hung himself. But, it is really not Tommy, we then see Alice putting bandages around Tommy’s face, they removed it and he is all flesh and blood. Alice tells Tommy that he gets his face as soon as she gets that journal. Batwoman gets dragged out of the room where she was attacked.

Luke tells Mary that he is going to save Julia and Kate. Mary asks Luke what is the bat protocol, he says he doesn’t know and he has nobody to ask – but he is not putting her in harm’s way. Somehow, Mary convinces him to go in, Luke concedes and says she needs some accessories and they go with everything.

Tommy calls his office for the journal, Johnny doesn’t want to give it up now, he says if Batwoman wanted it then he lied about its value. Tommy hangs up the phone and freaks out. Alice tells him to be more careful in the future for who he trusts. Alice goes on to say that she has a contingency, she released a rare bird from Arkham, Gotham’s Magpie.

Mary is in the club, she sees Aria and says hello. Aria doesn’t place her, she reminded her where they met. Mary is there looking for her cousin Johnny, she says to let her see what she can do. Johnny holds an auction, he selling of Batwoman’s things and Batwoman herself. Mary walks into the room and bids 2 million dollars. Elsewhere, Julia is getting interrogated, or more so beat up, for information, but she won’t tell anything.

Jacob goes to see Alice, she says this is a surprise. He tells her that Tommy Elliott just hung himself, or that is why it was made to look like. She tells him that she doesn’t give two hoots about Tommy and she is not going to help him. She tells him to get her out of there, he says he can’t he has to protect the daughters that he has left.
Magpie enters Tommy’s office to try and get the journal. Luke helps Mary to free Batwoman, while Julia manages to feed herself. Magpie gets the journal and she is headed to the roof, Batwoman tells Kate and Mary that she will go get her. On the roof Magpie and Batwoman fight, Magpie throw the journal off the roof, Batwoman dives and gets it, but Magpie escapes.

Kate thanks Mary for the help and tells her that she doesn’t want to lose another sister and a total badass. Regan walks up to see Kate, and two get back together.

Luke takes Mary into the bat cave and she is overwhelmed. She goes to take a picture and Luke says no, absolutely nobody can know about this place, Kate’s life depends on it. Luke tells her that when Bruce Wayne showed him this place, Mary is shocked to learn that Bruce Wayne is batman.

Kate wakes up, Regan is not there, and neither it the journal. Kate goes to tell Luke and he is furious, he says they are right back to where they started. Julia says the real question is what would a bartender want with it. Regan gives up the book to Magpie, her sister.

Someone calls Julia and she says there has been a setback, but the journal will be theirs soon.

Alice and Mouse have the journal, Magpie gives it to them and Alice sets her free. Mouse tells Alice there is one problem, Tommy forgot to tell them that Luscious wrote the whole journal in code.