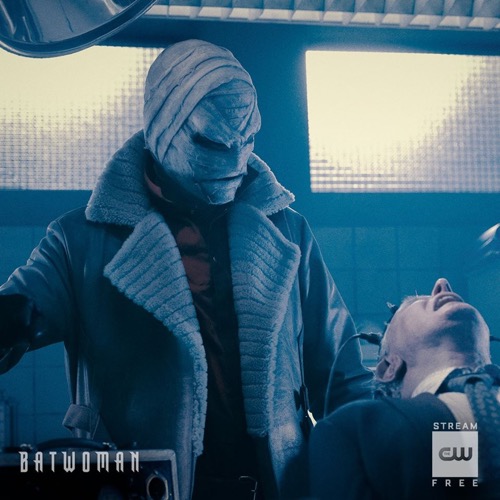 Tonight on the CW the series Batman airs with an all-new Sunday, May 10, 2020, season 1 episode 19 and we have your Batwoman recap below. On tonight’s  Batwoman season 1 episode 19 called, “A Secret Kept From All The Rest” as per the CW synopsis, “Members of Gotham’s intelligentsia begin disappearing, causing Cmdr.

Kane, Sophie and the Crows to go in search of the newest homicidal threat to the city; Kate starts questioning the loyalty of everyone around her just when she needs them most.”

Kate is on a mission, she knocks down Regan’s door and tells her no more BS. She tells her it wasn’t all BS, she still has feelings for her. Kate asks where is the journal, she says she doesn’t have it, she gave it to Magpie.

Dr. Butler is walking through the halls when he sees Janet and has some idle chit chat with her. He walks into a room and finds Alice, with the diary that makes no sense to her. She zaps the professor, he is gone. Mouse is there, he tells her to draw out the bat. She wants to know what is in this book because Tommy said it draws out the bat.

Meanwhile, Jacob updates his crew that one of their clients was kidnapped, Tony Kim, and footage of Professor John Carr was found in a dumpster. They were both abducted by the dame faceless person, Hush.

Luke and Kate disagree, she tells Mary that she has to find Stan.

Mary gets a Gotham safety alert, there has been another kidnapping, they think it is the same guy. Kate thinks this Hush guy is kidnapping code breakers because he has the journal written in code.

Alice has Tony Kim, she puts a device on his head and when he doesn’t translate the journal, she zaps him. Mouse tells her the more people she kidnaps, the more she exposes them. Alice tells Mouse there is one code breaker nobody knows about.

Kate and Mary are trying their best to investigate to find where hush is located. Mary tells Kate to apologize to Luke so they can get his help. Kate gets a call from a friend of Parker Torrez, she was abducted while having a conversation with her. Batwoman is on her way to find Parker Torrez. She finds the truck she is in with Hush, and has a shoot out with him.

Hush returns to Alice empty-handed, she thanks Parker for returning and tells him that he couldn’t handle a little school girl. Mouse is upset, he asks what do you mean Batwoman, was he followed? Alice turns around to Parker and asks if he is ready to do things her way.

Luke goes to see Julia. Meanwhile, Kate brings Parker Torres in the bat cave and Mary is there. Mary tells Kate to kiss Luke’s butt and get him back there.

Luke asks Julia why do people want his father’s journal so much. Kate calls him and tells him that she is on her way there. Julia tells Luke that Kate cannot know about anything. All of a sudden, Hush has a gun to Luke and Julia’s heads. Alice tells Luke that he is going to decipher daddy’s code or she is going to fry Julia.

Kate tries to call Luke, his phone is off, she knows something is up. Sophie is in the elevator, Mary turns to Kate and asks her if the should let her down since everyone else is allowed down. Kate meets Sophie is in the office, Sophie asks where Julia is, she is MIA. Kate tells Sophie that she heard she and Julia were hanging out. Kate tells her that if she hears from Julia she will tell her to check-in. In the meantime, Alice is zapping Julia, and Luke is screaming for them to stop, saying that they are killing her. Hush tells her that he doesn’t know how much more she can take, she says she has had worse. Luke admits to Julia that he needs his dad, he is not as smart as his dad, and they are both going to die because of it. Mouse tells Alice he doesn’t understand why they are keeping Tommy alive, she says it is only a matter of time.

Luke is trying to figure out his dad’s journal, he tells Julia that it is written in hundreds of different languages. She tells him that he has ten minutes to figure it out.

In the bat cave, Mary finds a pair of glasses that can translate what is in the journal. Luke, on the other hand, has also figured out something and he is not willing to share with Gotham’s villains. Luke tells Alice that his father was willing to die for his secret and he is willing to do the same.

Alice leaves the bat cave, batwoman enters the facility where Alice is being held.

Batwoman enters the room where Alice has Luke and Julia captured, she tells her to let them go, she has Lucious Fox’s glasses which can read the journal and will only give them up she lets the two go. Alice tries the glasses, they work, she releases Julia and Luke. Mouse tells Alice to get back to her cell, she instead lets the doors open to the convicts in the prison and all hell breaks loose. Batwoman watches on as the men are all fighting with each other, she gest involved and tries to stop them. Mouse tells Alice that they built a life for themselves there, she pulls off his mask and throws it into the fire, tells him it is over, he shouts no. Jacob and the crows arrive.

Kate walks up to Luke, he tells her that she messed up. She hugs him and tells him that she was lost without him. Luke says he was gone for five hours, Kate responds yeah.

Julia is with Sophie, she tells her that she has some nerve damage in her hand but it should heal eventually the two kiss – Kate looks on. Sophie leaves. Julia tells Kate she didn’t know what the journal entailed.

Jacob is visited by Batwoman, he tells her that Alice needs her as much as she needs her. He tells her she is done, to leave. And if he sees her again, it is war.

Alice is with Mouse in the underground, she tells him that nobody is asking him to stay. He tells her that he was happy, what happened to her. Does she even care that she burned the whole thing down? She says she cares about taking the bat down.