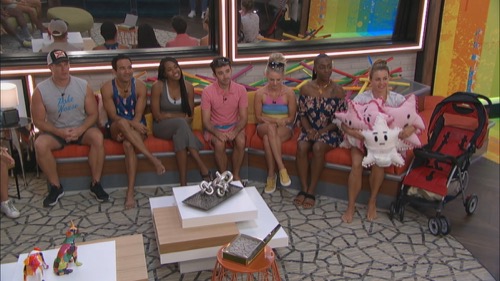 Tonight on CBS Big Brother 22 airs with an all-new Thursday, August 27, 2020, episode and we have your Big Brother 22 recap below! On tonight’s Big Brother season 22 episode 10 “Live Eviction and HoH,” as per the CBS synopsis, “Tonight on Big Brother it is another elimination night and either Janelle or Kaysar will be sent home.  Following the live eviction, there will be another HoH competition and we will get a new Head of Household.”

Janelle and Kaysar are both sitting on the chopping block tonight, one stays and one goes. Which one will it be? But, Janelle hasn’t earned the title of legend for anything.

As much as Kaysar is Janelle’s ride or die, she has to make sure he goes home and she stays in the house. Christmas tells Kevin that Janelle is too much of a good player to stay. But, Kevin thinks it is better to keep Janelle because she has at least talked game with him, Kaysar has not. Bayleigh checks in with her alliance to see who they are voting for to go home. Cody says it doesn’t matter who goes home, the other is following next week. Christmas tells Kaysar that he is in a really good position for staying. Ian’s plan is to lay low and just follow what everyone else does.

Janelle asks Kaysar if he has campaigned with anyone in the house, he says no. Dani thinks Janelle has to reach really high to stay in the house and realistically it is not going to happen. Janelle goes to Cody and tries to get his vote. Janelle offers her wedding band as collateral to stay in the house. Cody tells her it is definitely something to think about.

A rookie mistake threatens to blow up the house. David finds out that Da’Vonne tried to flip the vote the week before and get him out. He goes to her and confronts the situation, in front of Bayleigh. Da’Vonne says it is the other way, she stuck her neck out to save him. Da’Vonne gets upset, David tells them he is sorry, but this is so hard.

Tyler swoops around the corner and notices that David and Bayleigh have a heated conversation. David speaks to Tyler, he admits he told Da’Vonne that he said she was going after him. Tyler is upset, Janelle is going home and now he could be the biggest target in the house when she leaves.

Tyler tells David that he is going to be gone next week because of this. Tyler knows he can’t trust David anymore, he tells him that his gameplay is sloppy.

Da’Vonne is frustrated, she has gone above and beyond to help David and now he is accusing her of flipping votes on him. Bayleigh tells her to sit on it and swallow it.

Tyler tells Cody what David did, throwing him under the bus. Cody is upset, David, the rookie, is blowing up their game to their alliance. Now, Tyler is rethinking his game, maybe he should keep Janelle.

Janelle joins Julie on stage. Julie asks her if she knew she was going to be voted out, she says yes. Janelle thinks Da’Vonne and Bayleigh were the ones who voted out Kaysar. After the third try, she guesses Enzo and Dani, and she is right. Julie tells Janelle that Memphis played a role in her eviction tonight. Nicole, in her farewell message to Janelle, she tells her that they are not really good friends after all and don’t worry about not going to her wedding.

Time for the HoH competition, this one is called Carnival Quick Shot, and here is how it works. By Random draw, they have been divided into two groups of six. The first group is Nicole, Da’Vonne, David, Ian, Enzo, and Kaysar. Each of them has three balls, on the horn, they will roll their balls down the ramp with the goal of rolling them into the holes at the top of the ramp. The first three houseguests to do that will advance to the next round.

TO BE CON’T NEXT EPISODE