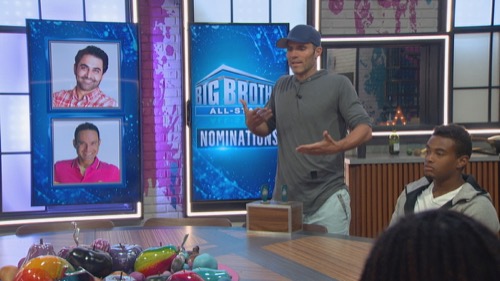 Tonight on CBS Big Brother 22 airs with an all-new Wednesday, September 2, 2020, episode and we have your Big Brother 22 recap below! On tonight’s Big Brother season 22 episode 12 “PoV and Ceremony,” as per the CBS synopsis, “Tonight on Big Brother it will be the PoV completion and Kayser and Kevin will battle to try and win and take themselves off the block.  Once the competition is over the Power of Veto competition will be held.”

Enzo nominated Kaysar and Kevin, everyone wants Kaysar out and Kevin is a pawn. Kevin is embarrassed, he was totally embarrassed. He wants answers, he trusted and likes Enzo and doesn’t understand why this happened. Enzo apologizes to Kevin, but he doesn’t buy it.

Nicole and Christmas feel bad for Kevin, but there is a Veto at play still.

Kaysar goes to see Enzo who says that he had no choice but to put him up because it made seven people happy. Kaysar tells him that he is not mad and they can still play together. Enzo admits that he doesn’t trust everyone in the house and would like to work with him, but he is lying. All Enzo wants is for Kaysar to leave the house this week.

David tells Bayleigh that he lost a lot of trust in the house, he feels like the odd man out and is worried about his place in the house. Anything he was trying to build, got torn down. Bayleigh feels terrible that David feels like an outsider in the game, but he is causing his own problems – he just needs to tone things down.

Ian goes to Enzo to talk game, he playing defense because he knows that Kevin could be a pawn. Enzo doesn’t like it, Ian has never talked to him before, and if the nominations don’t stay the same, then Ian is on his radar.

Enzo goes and tells Cody what Ian did. In a perfect Big Brother world, for Cody, Kaysar goes home. But if that doesn’t happen, Cody plans on getting Ian backdoored and sending him home because he is a tough opponent in this game.

David thinks he is going to be chosen for the Veto, Kevin asks that if he wins, would he take him off the block, he says yes. David says that given the opportunity, he wants to make some noise in the house, some game moves, or they are both going to be picked off one at a time.

Kevin tells David that he is happy that they talked before. Kevin is so relieved that he is not in this position alone. David is so excited, if he wins, he can save Kevin, secure his alliance with him, and cause some trouble in the house. Kaysar goes to speak to Bayleigh and tells her he didn’t come into the house to get picked off. He wants to see where her head is at since she is playing in the Veto. He asks her right out what she is planning to do, she gets annoyed that he is asking her and tells him that she doesn’t know yet. Her loyalty was to Janelle and doesn’t automatically transfer to Kaysar because she is gone.

Tyler and Enzo are pretty confident that they can win the Veto and keep the nominations the same. Cody walks in the room and they figure out that David and Kevin are probably aligned if Kevin picked him to play the competition.

Time for the Veto competition. Outside, there are all these puppet strings. This is the BB theatre where the players are to become puppets in a grueling performance by the puppet master. They have to hold on to the puppet strings for dear life because their hands and legs will be pulled in different directions by the puppet master. Beware, this is going to be an explosive experience. If they fall, they are out. The last houseguest to on to their puppet strings wins the PoV. Kaysar knows that if he doesn’t win, there are no more chances, he is going home.

Kevin wants to prove that he is not a pawn just to put on the block whenever they want. Kaysar is the first to drop, he is so disappointed. Enzo is the next to drop. David and Kevin are still in it, with Bayleigh and Tyler. Tyler and Bayleigh both fall, it is down to Kevin and David for the PoV. Kevin is not giving up, he will do anything to win. Kevin tells David that he has his back.

David is not giving up, he has to prove something to this house. David ends up falling, Kevin wins the PoV and he couldn’t be happier. Everyone underestimated Kevin, he is there to fight. David is disappointed, he wanted to show the house that he could be a competition beast. Kaysar thinks this is good, someone else has to go on the block when Kevin comes off and anything can happen on Big Brother.

Ian knows that Kevin coming off the block could mean that he goes on the block.

Enzo tells his alliance he doesn’t know what to do. Cody is throwing Ian’s name around, Nicole doesn’t want to say anything so they don’t get wind that she is working with Ian.

Enzo asks Christmas who she put up, she offers to go up, but she doesn’t want to come off as a pawn and easily expendable. And, if she goes up, nobody will figure out that she is working with Enzo. It’s a great idea, but Enzo doesn’t want to risk her going home because Pawn’s have gone home before.

Dani organizes to get the Slick Six together so they can figure out who to put up as a replacement. Dani slipped, she went into the HoH room to tell Taylor and didn’t realize that Nicole was in the room. Tyler is upset, Dani being this messy is not good for his game. Enzo tells Taylor that should backdoor her. Enzo has a big decision, put up Christmas, Ian or Dani. In the end, Kavin takes himself off the block and he puts up Christmas. He feels like he couldn’t make a risk now because everyone wants Kaysar out of the house.