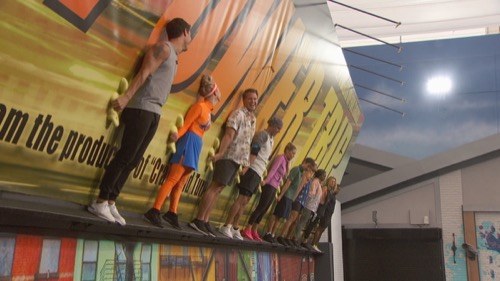 Tonight on CBS Big Brother 22 airs with an all-new Thursday, September 13, 2020, episode and we have your Big Brother 22 recap below! On tonight’s Big Brother season 22 episode 17 “HoH and Nominations,” as per the CBS synopsis, “Tonight on Big Brother it is the Big Brother the endurance Head Of Household competition will finish and a new HoH will be appointed.  Once there is a new HoH he or she will put two people up on the block.”

Day 37, we continue with the endurance competition for HoH. Christmas feels very conflicted about how her HoH reign went. Conversations with Da’Vonne got heated and she doesn’t really know where they stand. Christmas did ask Da’Vonne if she will promise to keep her safe if she got HOH, Da’Vonne promised, but she has no intention of keeping that promise. Dani does not want to win the HoH, but she has to stay up until Tyler falls off because she doesn’t trust him. Ian wants to win, to use it, to find out who has the superpowers and use them to benefit his game. Kevin wants to win, he feels if he has power he will be looped into conversations.

Da’Vonne is the first to drop and she is devastated, but not really, she dropped on purpose. Da’Vonne threw the competition. Enzo says he is too old for this, being goofy and shouting at the billboard. The water keeps pouring down on the houseguests and it is cold. Dani is shaking uncontrollably. David is down, he is really disappointed, he wanted to do better. Every time the wall tilts, Ian can seem to keep himself near the wall and he is tilting more than everyone else, he falls down.

Memphis jumps, since the first three will be Have Nots, he gives up. Enzo says this is the hardest competition they have had so far. Enzo changes his grip, and he is down too. Enzo wants Cody or Tyler to win, then he is guaranteed safety. Kevin finds this comp extremely difficult, he is pushing himself mentally and physically. Kevin is down, and it’s another week of survival, there is nobody else that he trusts in this house. Dani is not giving up, she is determined to stay on longer than Tyler. Tyler is down.

Words cannot express how happy is that Tyler is down; she is ready to throw this comp but she doesn’t want to make it obvious. Cody doesn’t want to win, he doesn’t want any blood on his hands. Nicole doesn’t want blood on her hands either, so she drops. That is Cody’s queue, he drops. Dani is flooded with emotions and filled with joy, she just wants to receive news from home and photos.

Tyler is happy that Dani won, but he is hoping she doesn’t want to get revenge on him. Dani has a feeling she is going to make people mad this week. Dani winning the HoH is great for Nicole, they trust each other. Dani goes to see Da’Vonne and tells her that it is going to be a good week. Da’Vonne plans on getting in Dani’s ear about Tyler this week and makes him the target. Da’Vonne tells David that they have to focus on the crack in Dani’s alliance. David is not that worried, he still has a superpower that can save him.

Ian asks Kevin how he feels about Dani being HoH, he says he is ok. Kevin genuinely likes Dani but he finds it difficult to talk strategy with her. Dani is alone with Da’Vonne, Da’Vonne will do anything, magic fairy dust, anything to stay in the house and not get nominated this week. Cody visits Dani, he tells her to put up Kevin and David, they are not in an alliance with them. He tells her that she has to put Kevin up, she has no choice. She tells Cody that she feels Tyler is coming after her, he tells her not to put him on the block, he is just going to win the Veto. Dani says she is thinking of backdooring Tyler. Cody doesn’t like it, because he thinks he will be the next target after Tyler.

Kevin tells Dani, Cody, and David that people say he is too feminine, his community was saying how disgraced they were at the way he acted. He knows his own truth and who he is, and only wants to live his truth.

Tyler goes to speak to Dani, he asks her what she plans on doing. He tells her to put him up, or backdoor him at this point, he deserves it. But, he thinks it is too early and they have more fish to fry. She knows that if she comes after Tyler, he could really hurt her game. He tells her that he won’t be upset, she should do whatever she needs to do.

Dani tells Nicole that Kevin is going to hate her if she puts him up. Also, Dani tells her that she doesn’t trust Tyler. Nicole thinks it is too early to target Tyler and if she does, it will become really ugly. Dani knows she has to take a shot at Tyler at one time in the game, but he is in the Committee and she doesn’t know if she wants to risk the relationships that she has with the rest of her alliance. Kevin then visits Dani and tells her that he wants to continue to work with her. She tells him that she is so scared of the powers, but she does have this big picture in mind and she would need pawns. She tells him that if she does put him up, she will guarantee that he stays.

She really likes Kevin and knows he wouldn’t come after her, but her alliance wants her to put up Kevin and David. Dani then sits with Tyler, she tells him that she hates being HoH, it is really stressful. He tells her that if she doesn’t put him up, he will be indebted to her. They make a deal not to put each other up, and they won’t go after each other until the final four. He totally knows that he put himself in jeopardy, but he hopes that she doesn’t put him up.

Time for the nomination ceremony. The first houseguest she has nominated is Kevin, the second is David. She did what Cody wanted her to do, unbelievable. She says that winning HoH, she doesn’t want to crush anyone’s dreams, she just chooses two people who she doesn’t talk game with. Kevin feels so alone and disposable. David has the power to take himself off the block, he is privately rejoicing that he is going to disrupt the house. Thank goodness someone is going to make a big move.